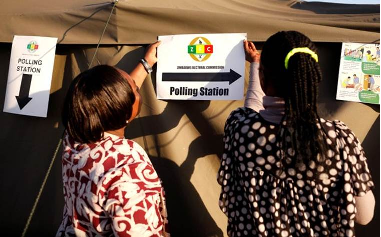 Zimbabweans go to the polls on Monday in the first election since the removal of Robert Mugabe, a watershed vote they hope will rid the country of its global pariah status and spark a recovery in its failed economy.

The election will see 75-year-old President Emmerson Mnangagwa, a long-time Mugabe ally, face 40-year-old Nelson Chamisa, a lawyer and pastor who is vying to become Zimbabwe’s youngest head of state.

Polls give former intelligence chief Mnangagwa, who took over as president after the army ousted Mugabe in a bloodless coup last November, only a slim lead over Chamisa. That makes a runoff on Sept. 8 a possibility if no candidate wins more than half of the votes.

Nicknamed “the Crocodile”, an animal famed in Zimbabwean lore for its stealth and ruthlessness, Mnangagwa has pledged to revive a moribund economy, attract foreign investment and mend racial and tribal divisions.

“People are saying, and I share their views, that something special is coming to Zimbabwe,” Mnangagwa said at his final rally in Harare’s national stadium.

“Once re-elected on Monday with a real mandate for change and a full five-year term, I guarantee you it’s ‘Go and Go’ in our country. My commitment is to bring concrete change that will give comfort to all Zimbabweans.”

Chamisa, a charismatic speaker who honed his craft in the courtroom and the pulpit, is winning over young and unemployed voters who are frustrated with nearly four decades of Zimbabwe African National Union-Patriotic Front (ZANU–PF) rule.

“The momentum is huge. Victory is certain. There is nothing that can stop the people of Zimbabwe claiming their victory,” Chamisa told reporters on Sunday.

“We are pulling out all the stops. We are leaving no stone unturned … to make sure we win this election.”

In a surprise intervention on Sunday, Mugabe said he would vote for the opposition, turning on his one-time allies.

Mnangagwa later accused his former boss of striking a deal with Chamisa, but provided no evidence.

“The choice is clear, you either vote for Mugabe under the guise of Chamisa or you vote for a new Zimbabwe under my leadership and ZANU-PF,” Mnangagwa said in a video on his official Facebook page.

For Zimbabwe to be welcomed back into the international fold, end painful sanctions and secure the donor funding programme it needs to stem chronic cash shortages, it needs the observers to at least sign off the vote as credible.

There have been reports of intimidation and coercion, and state media is biased towards the ZANU–PF but there is consensus that the process has been better than before.

Mnangagwa has welcomed in foreign media and international observers from the European Union, the United States and the Commonwealth, while opposition parties have been allowed to campaign freely.

The ZEC has repeatedly defended its independence.

While the election may not be judged ‘free and fair’, analysts say it may be classed as ‘good enough’ when measured against the rigging and violent suppression that marred votes under Mugabe.

Mnangagwa, often referred to as just “ED”, has made a big effort to win over the international community; hosting Western ambassadors, courting foreign investors and even patching up relations with white commercial farmers who were violently evicted from their farms under Mugabe.

“Look what he has done in just seven months. The place has changed,” said Patrick Musemburi, a 37-year-old minibus taxi driver in the capital Harare.

“Let him finish what he started.”

For all his talk of a ‘new’ Zimbabwe, Mnangagwa’s opponents are at pains to remind people that he was a trusted lieutenant of Mugabe for five decades and has failed to deliver on promises of change in the past.

“How long are we supposed to wait for things to get better? ED is full of lies just like the rest of the ZANU-PF,” said Chris Lore, a 26-year old street hawker.

“Chamisa is young. He has the energy to get us the jobs we need. It’s time for a change. We have suffered enough.”

Whoever wins will face the mammoth task of putting Zimbabwe back on track after 37 years of Mugabe rule that was tainted by corruption, mismanagement and diplomatic isolation, sending one of Africa’s most promising economies into crisis.