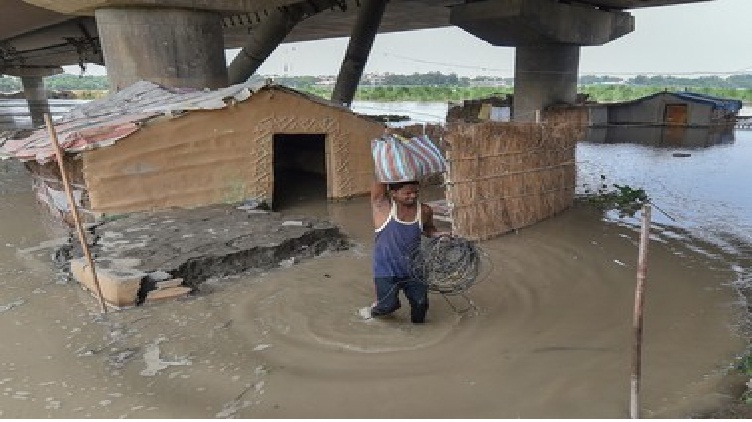 Twenty-seven passengers trains have been cancelled and seven trains diverted due to the closure of the Old Yamuna Bridge in Delhi on Sunday evening with the water level in the river rising due to rains, a day after the flow breached the danger mark, officials said.

The city government set up a flood control room and a round-the-clock emergency operation centre to monitor the river situation, they said.

An order banning movement of traffic on the bridge was issued by the disaster management authorities after the flow in the Yamuna showed a rising trend. The river was flowing at 205.5 metres on Sunday evening with the danger mark being 204.83 metres, the officials said.
Old Yamuna Bridge, colloquially known as 'Lohe Ka Pul', is a road-cum-rail bridge on the Delhi-Howrah line that was built over 150 years ago. It serves as a major connectivity link between Delhi and the neighbouring states.

"There is impending danger of floods due to this unprecedented rise in water level resulting in inundation of low-lying areas in the Yamuna bed and may also lead to loss of life and property," the order issued by the District Disaster Management Authority said.

"The traffic movement on the bridge is, hereby directed to be closed with immediate effect," it said.

Earlier in the day, Delhi Deputy Chief Minister Manish Sisodia took stock of the ongoing evacuation operation in the low-lying areas of the city, including Akshardham and Pandav Nagar, and appealed to the people to move to safer areas.

Many people have moved to safer places, an official said.

"The government has established a flood control room in the office of the district magistrate, District (East) at LM Bund, Geeta Colony. A 24x7 emergency operation centre has also been set up for monitoring the flood situation," a senior official said.

Meanwhile, in Haryana, Chief Minister Manohar Lal Khattar held an emergency meeting with senior officials on Sunday, and directed them to stay alert to deal with any untoward situation. He also conducted an aerial survey of the Hathnikund barrage located on Yamuna river in Yamunanagar district.

The minister was told that 6,05,949 cusecs of water flowing from the Hathnikund barrage was passing through Karnal and would reach Delhi by Monday.

With Yamuna flowing close to the danger mark, several villages were flooded leading to crop losses, officials said. In some villages in Yamunanagar district, the flood waters entered houses and buildings.

The administration has deployed boats at various places for people to commute from one village to other and to evacuate them, if the water level rises further, they said.

Khattar sought information on the water level from the deputy commissioners of Yamunanagar, Karnal, Panipat, Sonipat and Palwal, and other officers through video-conferencing. He also reviewed the arrangements made by them, an official spokesperson said in Chandigarh.

The officers informed the chief minister that 6,05,949 cusecs of water was flowing from the Hathnikund Barrage in Yamunanagar till 6 pm Saturday. Earlier in 2010, 8.05 lakh cusecs of water passed through this barrage, and in 2013, 7.5 lakh cusecs had passed, they said.

The Yamuna water level at the Hathini Kund barrage had crossed the danger mark of 90,000 cusec, according to an official.

"Canals in Haryana are closed when the water level crosses 70,000 cusecs at Hathnikund Barrage, and the water is passing through 18 doors," the spokesperson said.

The Karnal deputy commissioner informed the chief minister that about six lakh cusecs of water was passing from Hathnikund barrage on Saturday evening, and its effect could be seen later during the day. The officers said the water level was gradually decreasing.

A sub-divisional officer and three junior engineers have been deputed at every 20 kilometers in Karnal. Heavy earth moving machines and 20,000 sand bags have been kept ready to deal with any untoward situation. Arrangements have also been made for evacuating people to safer places as the situation demands, the officers added.

Medical teams have been arranged and officers of the animal husbandry department have been alerted to deal with the flood-like situation, the officers said.

The officers of Panipat district said Yamuna river passed through 14 villages of the district, adding that Army has visited and checked the areas adjoining the river.

The Sonipat district administration informed Khattar that the water of Yamuna was flowing one kilometer away from Asadpur village where officers of the irrigation department have been deputed.

The administration has also issued a warning to people living in the areas surrounding Yamuna river. A team of State Disaster Management force has already been put on alert, and a flood control room has been set up at the district level for fast response to deal with any flood-like situation, the officials said.

The chief minister directed the officers that the administration in the vulnerable districts should remain ready to deal with diseases which may break out after the water level of Yamuna recedes.

The officers should ensure that fogging is done in the affected areas from time to time, he added.

After holding a meeting with officials here, Khattar said 'special girdawari' (revenue survey) would be conducted to assess the damage to the crops caused by floods and rains.

He added that due compensation would be given to the affected farmers.