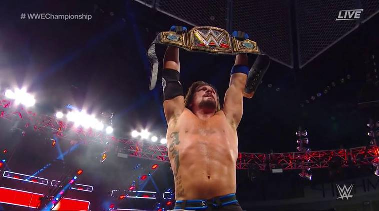 AJ Styles is still the WWE World Heavyweight Champion. Here are all the results of the WWE's Extreme Rules

AJ Styles defeated the Bulgarian Brute Rusev to retain his WWE World Heavyweight Championship at the Extreme Rules pay-per-view in Pittsburgh. An epic encounter between the two saw The Phenomenal One delivering a picture-perfect Phenomenal Forearm on Rusev to earn the win and carry on his title reign. Earlier, Shinsuke Nakamura defeated Jeff Hardy to become the new United States Champion, in match that saw the return of Randy Orton.

In the main event of the night, Dolph Ziggler took on Seth Rollins in a 30-minute Iron Man Match for the Intercontinental Championship. The ShowOff started the night on the backfoot, with The Kingslayer picking up a 2-0 lead within 8 minutes. But just when things were favouring Rollins, Drew McIntyre decided to intervene and beat down Rollins. He gave the former Shield member a pinfall by Disqualification to extend his lead to 3-0.

But the picture-perfect Claymore delivered to Rollins ensured that Ziggler picks up a 4-3 lead within four minutes. Rollins had to fight for his life to get a pinfall back, which he eventually did with just 3 minutes left on the clock. At the dying minutes of the match, Rollins struck Ziggler with a Stomp, but the clock ran out before he could go for the cover. The match ended in a tie, which meant that Ziggler would retain the belt. But Raw General Manager Kurt Angle intervened to announce a Sudden Death Extra Time.

McIntyre, who was banished from the ringside area, came out of nowhere, causing a distraction to Rollins, giving Ziggler the advantage to hit him with a Zigzag and get the winning pinfall to retain the title.