World Cup 2019 Match 7 Afghanistan Vs Sri Lanka, Who Will Win The Match

World Cup 2019 Match 7 Afghanistan Vs Sri Lanka, Who Will Win The Match 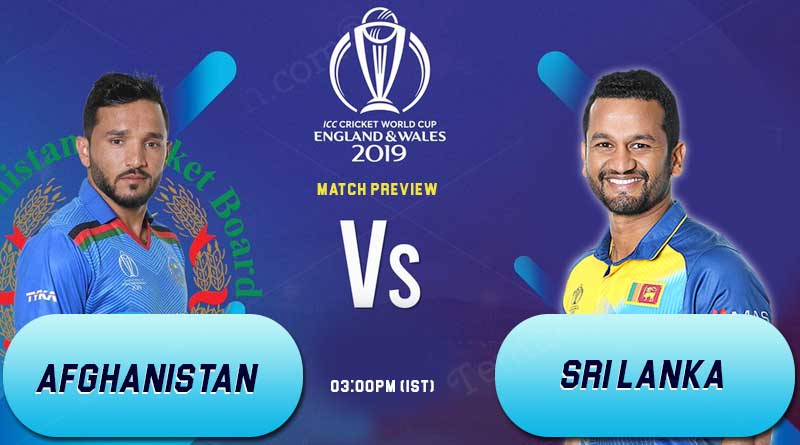 There’s not much good news for the players as there are chances of rain from 9 AM until the end of the day. There will be a 90 per cent cloud cover throughout the entire duration of the game. It won’t be a surprise if the match gets called off due to rain. The temperature will be around 15 degree Celsius. The humidity is expected to be in the 60s and 70s.

The track in Cardiff turned out to be an absolute belter as the Kiwis chased down 137 in 16.1 overs, though the Lankan batsmen strained on the same wicket. Even next time, the pitch isn’t expected to have many demons. Only 6 out of 21 ODIs were won by the team, batting first. Hence, the captains are likely to field first after winning the toss.

The Afghans are most likely to go in with the same lineup. Albeit Zazai and Shahzad bagged ducks in the last match, the damage they can inflict is pretty much known. The onus will be on Rahmat Shah and Hashmatullah  Shahidi to steady the ship in the middle order. Nabi remains the fulcrum of the team.

Najibullah can be promoted up the order depending on the situation. Hamid Hasan looked accurate last time and that’s a positive sign for Gulbadin’s men. Mujeeb Ur Rahman had an off day previously and he’ll be looking to make amends. The young Rashid Khan’s role will also be of prime importance.

The Islanders may bring in leg-spinner Jeffrey Vandersay in place of Jeevan Mendis. The Lankans look out of firepower in the bowling department and the tweaker can add variety. Barring skipper Karunaratne, the rest of their batters couldn’t survive the venom spewed by the Kiwis’ bowlers.

Lahiru Thirimanne and Angelo Mathews are the experienced heads in the batting lineup and they’ll need to show the way for the rest of the team. Kusal Mendis got out for a golden duck the last time. The fast bowlers- Isuru Udana, Suranga Lakmal and Lasith Malinga- also need to find a way of getting wickets.

The prediction is for Afghanistan to win the match