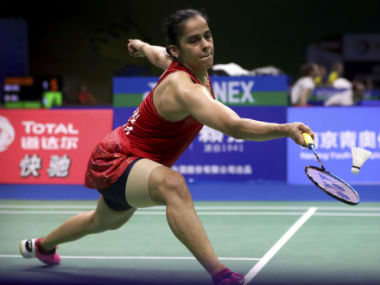 Saina Nehwal is far from done with international badminton. The competitive fires still burn brightly, and continue to consume opponents younger than her and ranked higher in the Badminton World Federation (BWF) hierarchy.

In an eagerly awaited third-round match of the World Badminton Championships on Thursday, the 28 year old Indian shuttle queen made light of her 10th seeding, and sent the No 4 seed, 23-year-old Ratchanok Intanon of Thailand, packing with a richly deserved 47-minute 21-16, 21-19 victory, to earn the right to meet another former world champion Carolina Marin of Spain in Friday’s quarter-finals.

Seventh-seeded Marin, who had won the world crown in 2014 and 2015 and also bagged the gold medal at the 2016 Rio Olympics, made the last-eight grade with a storming 21-7, 21-13 triumph over Japanese left-hander Sayaka Sato. Having fully recovered the foot speed that made her such a terror between 2014 and 2016, the Spanish southpaw looked in ominous touch as she hacked down the 15th seeded Japanese in just two minutes over the half-hour mark.It was the great Indian’s eighth consecutive World Championship quarter-final, a feat that has only been achieved earlier by one player – five-time world champion Lin Dan. It was also a tribute to her consistent excellence over the years, despite the fact that she had to return from a career-threatening knee injury sustained at the 2016 Rio Olympics.

It must be underscored that Saina leads the rivalry with Marin by a slim 5-4 margin, which includes a 22-20, 21-18 triumph in their last meeting at the Denmark Open in October 2017. The Indian, who was speedy and aggressive throughout against Intanon and also put up a sterling defence against the Thai’s best shots, will be hell-bent on erasing the unhappy memories of her 16-21, 19-21 defeat at Marin’s hands in the final of the 2015 World Championships that had relegated her to the silver.

Saina’s compatriot, Pusarla Venkata Sindhu, also looked far more focused and determined than she had been in the course of her recent run in the Indonesia and Thailand Open. The gangling 5’ 10” Hyderabadi responded well to the courtside exhortations of coach Pullela Gopichand, to recover from a 3-10 deficit in the second game against South Korea’s No 9 seed, Sung Ji Hyun, and run out a 21-10, 21-18 winner in 42 minutes.

Having played as well as she did on Thursday, the third-seeded Sindhu, the Olympic silver medallist and Glasgow World Championship runner-up, would be eagerly looking forward to Friday’s quarter-finals, which will feature a repeat of last year’s World Championship final, in which she had suffered a heart-breaking 19-21, 22-20, 20-22 loss in 110 minutes to Japan’s Nozomi Okuhara.

The pocket-sized Japanese made the grade with a none-too-convincing 23-21, 21-13 win over Malaysia’s unseeded Goh Jin Wei, who had sidelined 14th seeded Japanese Aya Ohori in the previous round. Okuhara is 6-5 ahead in the career head-to-heads with Sindhu, and won their most recent meeting in Bangkok last month, but it is the Indian’s “turn” to win in Nanjing, if one goes by the bizarre pattern of alternate victories in their last six encounters.

Joining his two fellow-countrywomen in the quarter-finals was former Indian national champion, Bhamidipati Sai Praneeth, who turned on the style against Denmark’s doughty Hans-Kristian Solberg Vittinghus, and carved out a runaway 21-13, 21-11 triumph in a mere 39 minutes over the man who had knocked out 15th-seeded Indonesian, Tommy Sugiarto, in his previous outing.

Praneeth was quicker on his feet than he has been in his recent outings on the South East Asian circuit, and his adroit positioning enabled him to parry virtually all of Vittinghus’s smashes and sliced drops — a ploy that ended up frustrating the towering Dane. But the 25-year-old Indian will be tested to the limit on Friday against Japan’s No 6 seed, Kento Momota, who made the quarter-final grade with a distinctly shaky 13-21, 21-17, 21-8 win over 16th seeded Anders Antonsen of Denmark.

Momota, who is one of the strong favourites for the men’s singles title in Nanjing, had no answer to the strokeful Danish player’s hustle for a game and a half, and looked headed for the exit door. However, once Antonsen’s speed flagged, and his petrol ran out, the Japanese left-hander began controlling the rallies, and was right on top in the decider of their 73-minute long battle.

Praneeth, who won the Singapore Open Superseries title last year, and Momota have clashed on two earlier occasions, and the score sensationally reads 2-0 in the Indian’s favour, but with a corollary — both their meetings were as far back as 2013. Since then, the Japanese 23-year-old has improved by leaps and bounds, and has made his way back into the top 10 after a year’s suspension till April 2017, by which time his ranking had dropped beyond the 250 mark.

There should have been a second Indian male shuttler in the quarter-finals, but fifth seeded Kidambi Srikanth disappointed all the Indian supporters who had installed him as one of the prime favourites for the world crown. The Guntur lad was knocked out by a 18-21, 18-21 scoreline in 41 minutes by his nemesis, 30-year-old Daren Liew of Malaysia, whom he had failed to beat in two earlier meetings, albeit as far back as in 2013.

Srikanth has not looked anywhere close to the player who won four Superseries titles and was runner-up to compatriot Sai Praneeth at the Singapore Open in 2017. He struggled to get past Spanish journeyman Pablo Abian in the previous round, and found himself out of sorts on Thursday against the astute strokeplay of Liew, who rarely gave him time to execute his dreaded overhead smashes.

For supporters of Indian doubles, it was a treat to witness the manner in which senior stateswoman, 28-year-old Ashwini Ponnappa, cajoled, encouraged and shepherded her 17-year-old mixed doubles partner, Satwiksairaj Rankireddy, in eking out a hard-fought 20-22, 21-14, 21-6 victory over the No 7 seeds from Malaysia, Goh Soon Huat and Jevon Shemie Lai.

What was heartening from the Indians’ viewpoint was that they did not get disheartened after losing the first game from a dominant 19-16 position, but maintained the pressure on their rivals in the second. Ponnappa’s measured netplay and Rankireddy’s quicksilver movements and powerful smashes unsettled the Malaysians to such an extent that they were mere passengers in the decider.

The Indians have, however, been handed a really tough quarter-final challenge against the top-seeded Chinese pair of Zheng Siwei and Huang Yaqiong, playing in front of their home crowds. The No 1 seeds made a quick 21-15, 21-13 meal of Indonesians Hafiz Faizal and Gloria Emanuelle Widjaja, who had beaten Indians Pranaav Jerry Chopra and N Sikki Reddy the previous day.

This review of the pre-quarter-final proceedings would be incomplete without a mention of the travails of Chinese legend Dan, who has won the world title five times and ended second-best on two occasions. The 34-year-old southpaw felt the weight of his years as he was totally outpaced at 21-15, 21-9 by the new young gun from his own motherland, Shi Yuqi.

It was a 44-minute duel, in which the second game occupied just 11 minutes; and it also marked the third successive triumph for the reigning All England champion, who has a dozen years on his illustrious senior. Alas, as they say, time and tide wait for no man; and, on this showing, one can perceive the relentless creeping in of the twilight at the end of what has been a gloriously long, sunny day.