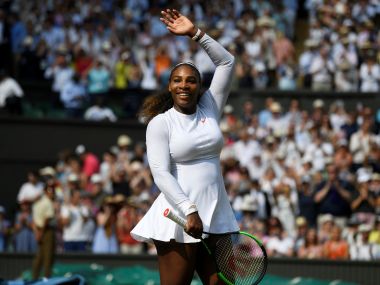 The first to disappear usually is the first serve. Julia Goerges, serving great and moving well in her first Grand Slam semi-final, was unfazed by the occasion of facing Serena Williams on Centre Court. Her percentage of first serve points won was second only to Williams in the tournament among the four semi-finalists. She had her forehand working and even saved a break point to hold early in the first set. And when that wasn't clicking, her second serve came handy too.

Goerges has a unique service motion where the racquet stays horizontal for a moment when her ball tosses up before it adjusts itself in her right hand to create lethal deliveries. She was mixing direction on the second serves and in Williams' second service game she even brought up couple of deuces. And then something special happened that happens only with once in a lifetime player.

Williams could not help but find herself at the spot where the ball was. Williams getting to balls is one thing, but she also produced angles that only she can create. Goerges, who had prepared her head so well so that she can give her best at this level, could only look at fuzzy yellow things flying past her.

Once Williams broke that Goerges's serve, she came up with four winners to hold for 5-2. What can four consecutive winners, hit against a player in her first Grand Slam semi-final who herself is not playing so badly, lead to? Goerges responded with four unforced errors and a double fault. 6-2, first set Serena Williams. The first to go is the serve.At one point there was a graphic showing where Goerges's hitting points were throughout the tournament. They were all on or inside the baseline through four rounds and a quarter-final. But the shots from Williams are not like the shots from any other tennis player. They were hit deep to Goerges who had to play from well behind the baseline, something that she was alien to at least in the 10 ten days.

Williams was putting on a service masterclass that she always does. Goerges couldn't gain any inroads until it was too late at 5-4 when Williams was serving for the match and the occasion led to some nerves. The Williams service is the greatest in tennis and it can demoralise opponents both mentally and physically. They are not bullets, invisible to the eye. They are hit with speed, precision and purpose with the second shot and third shot already planned in a way that losing or winning the point is always on Williams's racquet. By the middle of the second set that's what Goerges must have been thinking.

In the commentary booth, Martina Navratilova and Tracy Austin had run out of ideas for Goerges. What is one supposed to do here when, all things considered, you are playing as well as you can? That's a tricky situation to be in. Goerges was ranked second in first serve receiving points won in the tournament but Williams never gave her enough of them to make something. At 2-3 and precarious 30-30 on Goerges's serve in the second set, Williams spun a lob out of nowhere that Goerges just about managed to hook back clean and fine. But to her astonishment, Williams was already there to send the ball down the line for a winner without much fanfare. Break point Williams. Finally dismantled and out of weapons, Goerges went for the perilous drop shot and passed on a date with the Wimbledon final. Goerges ended with serving at 58 percent, 20 winners and 11 unforced errors. Those are decent numbers. Williams on the other hand made only seven unforced errors.

The person leading the charts for first serve receiving points won this tournament is Angelique Kerber, who earlier in the day got past an erratic Jelena Ostapenko to set up a repeat of the Australian Open 2016 final. Ostapenko, who is always always punching and finding ways to end points with big winners, began the first set with a double fault and ended it with a double fault.

The counter-puncher was clearly the more disciplined player and she was also serving between 75-80 percent midway through the second set while the same stat ended at a dire 56 percent for Ostapenko. Ostapenko's bad start must have played on her mind when briefly in the second set she began to rally with some mid-court forehands. But her finishing shots never came and her ability to put juicy second serves into play deserted her.

Ostapenko ended with a very Ostapenko number of winners — 30. But her unforced error count was at a whopping 36. Kerber, like Williams, had little reason to make errors and now finds herself in her fourth Grand Slam final. She's played two against Serena Williams and they have split those results. Like with any other player of the present generation, Williams' head-to-head record with Kerber is lopsided but the match-up is a fascinating one. The attacker against the counter-puncher. Service masterclass vs returner extraordinaire.