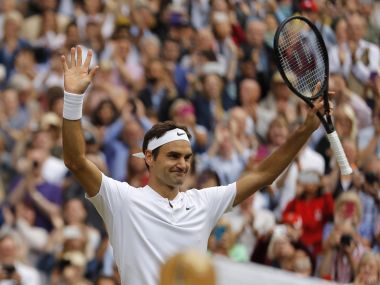 Even in the old black and white footage, the colours of Wimbledon are vivid. It doesn’t take a flight of imagination to contrast the lush green with the pristine whites as wooden racquet-bearing trailblazers trade gentle strokes back and forth. The allure of Wimbledon hasn’t faded precisely for this sameness, this year-upon-year polite knock it makes to occupy a place in your lives for a couple of weeks. For all the breathlessness of modern life, Wimbledon’s assurance of a throwback is its enduring attraction.

So here we are, on the cusp of another fortnight of delicious possibilities. A near 37-year-old father of four is the men’s top seed again and ridiculously, favourite for a ninth title. Up until the very last minute, the prospect of the “big four” — so christened for their utter dominance till just a couple of years back — reassembling at the same event after a while was all too real. Alas, one among them, local man Andy Murray, owner of two titles and a lifetime of adulation at these hallowed grounds, was simply unable to convince his injury-wrecked body that it was ready yet for two weeks of best-of-five-set battles.

A year ago, Roger Federer was anointed leading contender for good reason. He’d won thrillingly in Australia, captured a string of titles to back that victory up and then packed his bags and put his feet up for the tough-as-nails clay court season. It was a masterstroke as he eviscerated all opposition, capturing the title without dropping a set. The joie de vivre that the great man discovered in his play in 2017 has retained much of its splendour this year too. The encore at Melbourne has been followed up by a couple of more tour titles and yet, there is a gnawing fear that a stumble isn’t beyond the realms of possibility.Murray’s absence robs the tournament of a compelling storyline but there’s still plenty others to look out for in this elite club of magnificent athletes. Among them they carry delicate bodies, fragile minds and a continuous battle against old father time, making every appearance on court an occasion to watch eagle-eyed. At every step lie potential banana peels, ensuring virtually no contest can have an assumed conclusion.

Consider recent outcomes. In Stuttgart, where Federer would ultimately win the title, the maverick Australian Nick Kyrgios was only overcome in a third set tie-breaker in the semi-final. Frenchman Benoit Paire held two match points in an early round encounter at Halle the following week that Federer narrowly escaped from. He reached the final, only to be denied a 10th title at the tournament by 21-year-old Borna Coric of Croatia in another three-set encounter. Admittedly, it is only clutching at straws but coaches of Federer’s rivals will take that; poring over reams of video footage of these encounters as they plot for ways to trip him.

To watch Federer on court these days, more so on grass, is a visible demonstration of breathtakingly quick activity in slow motion. Federer is unhurried in his movements, yet hustles the man across the net with his method. The ball is met on top of its bounce and with the rediscovery of the venom in the single-handed backhand, the opponent is forever wary of a winner whizzing past at any stage in the rally. On grass in particular, Federer relishes these fast-moving points, creating the aura of relentless pressure while appearing unruffled through it all. It helps of course that the crowd at almost every match he plays is completely partisan, making the hapless rival feel more like an unwelcome intruder.

While Federer’s progress will generate the by now entirely expected tingling excitement, every stride of his great modern-day rivals will be a keenly anticipated sub-plot. Rafael Nadal, fresh from yet another French Open triumph, will rekindle his strange love-hate affair with Wimbledon. From 2006 to 2011, this so-called clay court specialist made five finals, winning twice.

However, since then, the relationship has turned sour and Nadal has failed to get past the fourth round, succumbing to an array of journeymen. The rigours of a full schedule on clay have surely played a part but the World Number One continues to strive. He arrives without a competitive match since the win in Paris and has tempered expectations of a return to his best days on grass.

Nadal, and of course Federer, by sharing the last six slams between them, have created daylight between themselves and the rest of the field. Lurking in the chasing pack besides an assembly line of skilled players is a three-time champion — Novak Djokovic. The Serbian colossus provides perhaps the most intriguing of all narratives.

The robotic, machine-like structure to his play was one of modern sport’s most impressive spectacles. It carried him to 12 major titles and a permanent place in history. Yet, since he won the French Open in 2016 to join an elite club of players with all four major trophies, an inexplicable frailty has clouded over. There’s been references to personal problems, an elbow injury has doggedly refused to heal fully and coaching staff has come and gone.

Djokovic though has laboured on gamely, accepting setbacks with grace and dignity in his public appearances. He’s lost 9 of 27 matches this year, hasn’t won a tour level title for over a year and has seen his ranking slide to the fringes of the top-20. Hope though, continues to float, that the beast that so devoured all comers is lurking menacingly within. In his only tune-up for Wimbledon, Djokovic made the final at Queen’s Club, beating world number six Grigor Dimitrov along the way and only succumbing to 2017 Wimbledon finalist Marin Cilic in the summit clash.

In essence, this annual joust on grass has a blink-and-miss-it feel to it. In every corner of the All-England club, players abound that seek to resurrect their careers or extend the glory days in the sunshine. The journey to discovering the champion at the end of it all may well be the most enthralling yet in recent memory. Belt up!