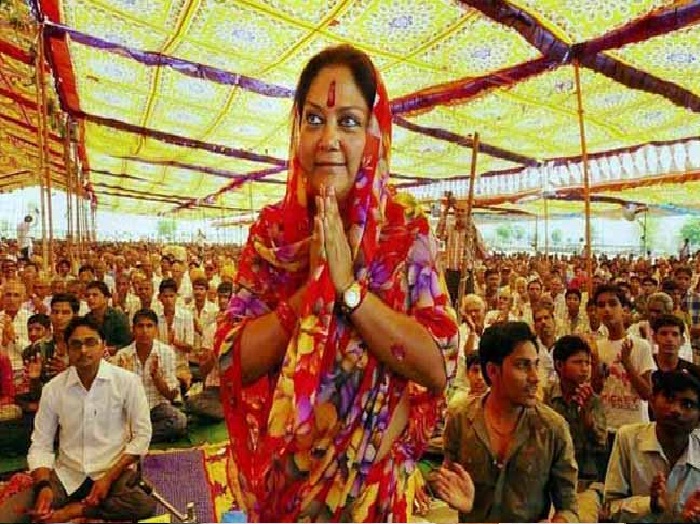 RAJSAMAND: Over the next 40 days, Rajasthan Chief Minister Vasundhara Raje will cover 6,000 km and visit 165 assembly constituencies of her state in what she calls a rath or chariot.
The BJP will launch Vasundhara's Rath Yatra today from the Charbhuja temple in Rajsamand district, 100 km from Udaipur, ahead of the state elections later this year.

The rath is essentially a modified Leyland 407 bus, replete with air conditioning, a bathroom and an elevator. A sunroof allows the Chief Minister to address public meetings from the bus itself. The roof opens up and allows her to come on top of the bus, creating a mini stand.

The pre-poll tour will be Ms Raje's biggest public outreach programme after the BJP's stunning defeat in the by-elections in February this year. The party lost the Alwar and Ajmer parliamentary seats and the Mandalgarh assembly segment to the Congress.

The Rajasthan Gaurav Yatra will highlight the achievements of Vasundhara Raje's government and will cover 40 days , an exhaustive 6,054 kilometres and 165 of the 200 assembly constituencies in Rajasthan.

The tour will be flagged off from the Chaarbhuja Mandir, a lord Krishna temple in Rajasamand.

Since she became Chief Minister for the first time 18 years ago, Vasundhara Raje, 65, has always started her election campaign from Charbhuja temple.

"This place is linked to the ethos of the Mewar region. It is associated with valour, history and devotion. That's why Vasundhara ji comes here," her cabinet Arun Chaturvedi , who is overseeing the preprations for the long tour, said.

The Charbhuja temple is the only temple in Rajasthan where the traditionally cattle-rearing community of Gujjars are the priests.

Vasundhara Raje's previous term as Chief Minister saw violent agitations by the Gujjars demanding reservation in jobs and education. Her government worked out a formula where the Gujjars were given a 4 per cent reservation under a special quota. But this formula has been challenged in court.

This time, she is also banking on the delivery of her welfare schemes to garner votes.Over the next 40 days, her mammoth outreach programme will be to give people a marksheet of her government's performance.

But the Congress says the real test will be the people's support and not the party's. "Vasundhara Raje has to answer people of the state , she never met people when in power for 4 years and now do people want to meet her?" said Rajasthan Congress chief Sachin Pilot, who is all set for his election blitz with Rahul Gandhi's public outreach programmes in Rajasthan this month.

But Ms Raje is fighting not just anti-incumbency but also pressures from within her party. She refused to accept the high command's choice for party president, believed to be Gajendra Singh Shekhawat, and decided to go with an RSS man, Madan Lal Saini, instead.