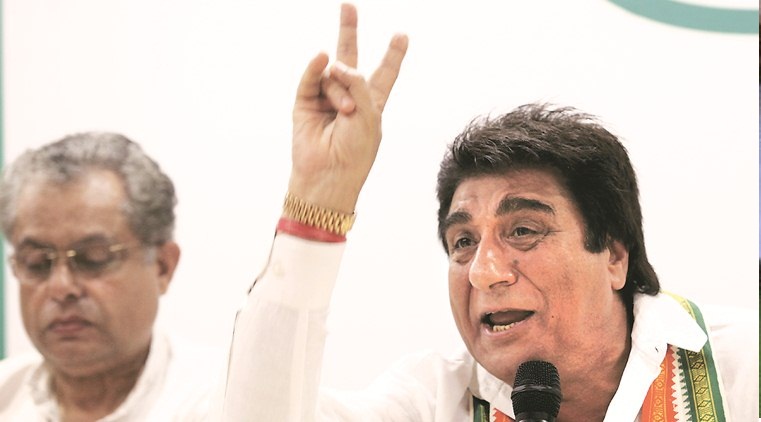 A day after Prime Minister Narendra Modi visited Lucknow and responded to Congress chief Rahul Gandhi’s remarks in Parliament, the party dared him to a direct confrontation on the questions raised by him. Congress state president Raj Babbar said Rahul had “exposed” Modi who responded with indirect references.

Although Babbar did not take his name, in an indirect reference to Rajya Sabha member Amar Singh, he said the PM was trying to take help of a “bimar gawah (sick witness)”.

On Sunday, the Prime Minister had said, that while he had no problems being seen with industrialists, there were people who went out of their way to not be seen with them, “lekin ek bhi udyogpati aisa nahin hoga jinhone unke gharon mein jaakar ke pranam dandwat na kiyaa ho (but there would be no industrialist who wouldn’t have gone to their house and bowed down before them)”. He then pointed to Singh, who was among the guests, and said he would know all about it

“Yeh kya ishare ishare baat karte ho… kabhi idhar se kabhi udhar se… woh karte they… Soch rahe ho ki woh jo bimar gawah baidha rakha hai woh apko jawab dega. Bimar gawah se gawahi mang rahe ho… agar himmat hai to khulke kaho… Rahul ji ne khulke kaha hai. .sansad mein kaha hai… sadan mein kaha hai… is desh ke patal ke record pe kaha hai unhone… (Why are you making indirect references. You are thinking that the ill witness that you had made sit in front of you would give you a reply? You are asking a ill witness, if you have courage then ask openly. Rahulji had asked openly… in Parliament, on the floor of the house… on record…),” said Babbar. “You had made an indirect comment on Rahul Gandhi. He has not got clicked with any industrialist because he does not have any relations with them.”

He demanded that Modi reply to Rahul’s charge that the fighter jet Rafale deal was “snatched” from a government agency and awarded to a private company at a much higher rate.

On Prime Minister’s plea that industrialists ought not to be called thieves, Babbar said, “but Prime Minister gets clicked with “lutere Nirav Modi”, referring to the diamantaire accused of fraud in the PNB scam case.

Babbar said that the Prime Minister had not replied to a single of Rahul’s 10 questions in Parliament but instead dished out “one lie after another”.