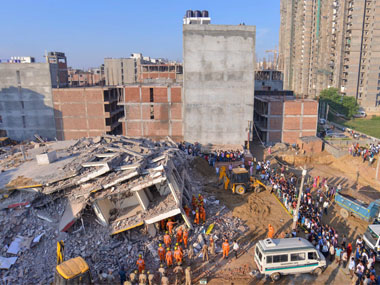 Noida: Eight people were killed and several feared trapped under the rubble of two adjacent buildings which collapsed in Greater Noida on the outskirts of the National Capital, officials said on Wednesday.

A six-floor under-construction building crashed on a five-storey building next to it, bringing it down as well, in Shahberi village under Bisrakh police station on Wednesday night.

Officials said at least one of the buildings was unauthorised.

At least 12 labourers were in the under-construction building and all of them were feared trapped, Chief Fire Officer (CFO) Arun Kumar Singh said.

Two bodies were pulled out of the rubble late Wednesday night and another removed Thursday morning as 150 personnel as the National Disaster Response Force (NDRF) mounted a rescue operation along with the police and the fire department.

Rescuers deployed heavy machinery to shift concrete slabs and used drills in a bid to reach people buried under the debris. Sniffer dogs tried to detect any sign of life.Five more bodies were brought out in the evening and later at night.

A crowd of people hung around the mishap site, including some who believed their relatives were trapped under the debris.

Some flat owners who were planning to move into their new homes in the next few days also watched the rescue effort.

Local politicians and media teams thronged the area as NDRF personnel asked people to keep away.

Three of the victims have been identified as Ranjit, Shamshad and Priyanka. Three members of Priyanka's family were still trapped, Singh said after her body was pulled out.

The police have arrested four people, including the landowner. Altogether, 24 people have been named in the FIR. Charges include culpable homicide not amounting to murder.

Officer on Special Duty (OSD) in Greater Noida Development Authoriity, Vibha Chahal, has been removed from her post.

Adityanath asked the Meerut divisional commissioner to conduct an inquiry and determine the extent of illegal construction in the area.

Earlier in the day, Gautam Budh Nagar District Magistrate Brajesh Narayan Singh had also ordered an investigation into the mishap, to be completed within 15 days.

"They have tried to sell an unauthorised construction to the people. We will initiate proceedings under the National Security Act against them," Singh told PTI.

He said the rescuers were exercising caution while operating the machines so that those trapped under the debris were not harmed. This was leading to the delay, he said.

Kumar said the rescue operations were likely to be completed on Thursday.

A state government statement said a magisterial probe will find out whether the buildings were under the jurisdiction of the Greater Noida Development Authority and if a no-objection certificate (NOC) was obtained before carrying out the construction.

It will also determine if the quality of the building material was up to the mark and the construction workers were registered in accordance with the labour laws.

But the notification related to acquisition of land there was cancelled by a Supreme Court order in May 2011, he said.

Local residents claimed that some builders had purchased land directly from the farmers and developed an unauthorised colony.

According to the FIR lodged at Bisrakha police station, poor quality material was used in the construction of the building.

The FIR said district authorities had been warning builders and contractors in general against unauthorised construction.

Three of those arrested have been identified as landowner Ganga Shankar Dwivedi and brokers Dinesh Singh and Sanjeev Kumar, both residents of Shahberi.