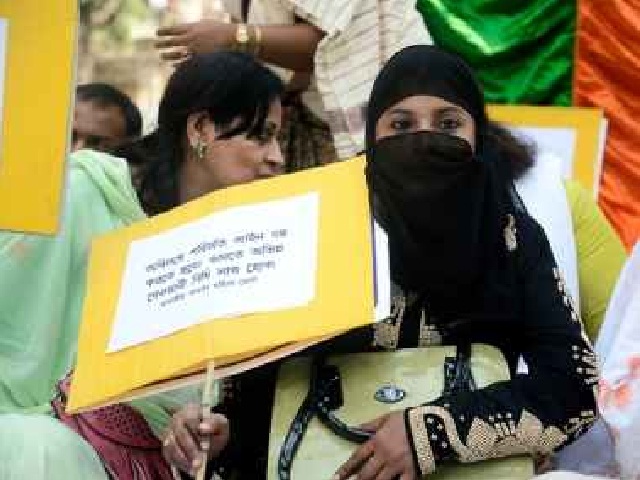 The Muslim Women (Protection of Rights on Marriage) Bill 2017 is set to be tabled in the Rajya Sabha, where the government lacks numbers, on Friday, a day after the Union Cabinet cleared the amendments to the bill.

However, if the Upper House of the Parliament fails to pass the bill, the Centre intends to bring in an ordinance or an emergency executive order to enact the law, reported NDTV.

On Thursday, the Cabinet approved inclusion of a provision granting bail, one of the demands of the Opposition parties, to men found guilty of giving instant triple talaq to their wives. It also approved that complaints in a triple talaq case can only be filed by the victim (wife) or a blood relative, with only a magistrate, not a local police officer, given power to grant bails with certain terms and conditions.

While the proposed law is still "non-bailable", sources later told PTI the magistrate would ensure that bail is granted only after the husband agrees to grant compensation to the wife as provided in the bill. The quantum of compensation will be decided by the magistrate, as per the bill.

Giving instant triple talaq, or talaq-e-biddat, will continue to be illegal and void and will attract a jail term of three years for the husband.

The Bharatiya Janata Party-led Centre is hoping to nudge the amended bill forward in Rajya Sabha on the last day of the Monsoon Session, and convince non-NDA parties to support the bill. In any case, the BJP has directed all its MPs to be present in the Rajya Sabha on Friday.

If the government introduces more amendments in the Rajya Sabha, it will have to go back to the Lower House for approval of the amendments.

Among the two large non-NDA parties in the Upper House which comprise 22 MPs— Odisha chief minister Naveen Patnaik's Biju Janata Dal (BJD) and Tamil Nadu's AIADMK — it is uncertain if they will support the amended bills. However, it should be noted that both these parties voted for NDA candidate Harivansh Narayan Singh during Thursday's Rajya Sabha deputy chairman election, where Singh won with 125 votes in his favour, reported NDTV.

Speaking to reporters in New Delhi on Thursday, law minister Ravi Shankar Prasad wondered whether the Congress, the BSP and the TMC would continue to oppose the bill even after insertion of the provision of bail.

"Under the Dowry Act, Muslims and others go to jail... they are also jailed under the Domestic Violence Act... why oppose jail for triple talaq," he said.

Urging UPA chairperson Sonia Gandhi, Mayawati and Mamata Banerjee, to support the bill, Prasad said that if Congress does not support the triple talaq bill, Gandhi should not talk of gender justice, dignity and equality.

The triple talaq bill was passed in the Lok Sabha last year, but remains pending in the Rajya Sabha amid Opposition's reservations. The Supreme Court in 2017 had banned instant triple talaq, but activists and lawyers urged the government to implement a concrete law to lay down the punishment that would be handed to the offenders.

Under the triple talaq practice, a Muslim man can instantly divorce his wife by repeating the word "talaq" thrice.