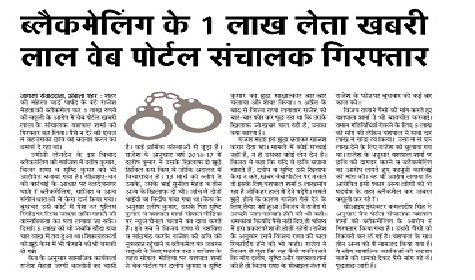 Editor's Note: The threat to the sanctity of journalism has not been more serious in these challenging times. With the menace of fake news already rampant, thanks to easy access to social media, there is another legion of individuals who now pose as pseudo-journalists, threatening the very edifice of journalism — trust. In a series of stories, reporters from Tier-I and Tier-II cities in India will examine self-proclaimed journalists and their modus operandi to blackmail and extort money by abusing their ill-gotten power.

In May, a "journalist" was arrested from Haryana's Ambala district after being charged with blackmail and extortion. The accused, Yashpal Sharma, ran a YouTube channel called Khabari Lal Haryana. He was accused of using the channel to malign property dealer Rajesh Mehta. Mehta filed a police complaint after claiming that he had been receiving extortion calls, which led to Sharma's arrest.

The Ambala Police arrested Sharma on 8 May under sections 384 (extortion), 500 (defamation), 501 (printing defamatory material) and 120B (criminal conspiracy) of the Indian Penal Code. One Vijay Rana, who worked as a middleman for Sharma, was also booked, along with the father-son duo of Dalip and Shristi Kumar. The police also recovered Rs 1 lakh from Sharma after arresting him.

According to the complainant, there was a long-standing property dispute between him and Dalip and Shristi Kumar, which was pending in a court in Ambala. Mehta alleged that the Kumars had also filed a false complaint against him at the Haryana 'CM Window' forum, but he was given a clean chit. He said he was shocked to learn that the Kumars were being interviewed on Khabari Lal Haryana and were levelling serious allegations against him. These allegations were played out over several episodes on Sharma's YouTube channel, and the story was gaining a lot of views through social media shares.

Mehta alleged that on 1 May, he had received a call from Rana, who had sought money to retract the stories. On 8 May, Rana offered to settle the deal for Rs 5.25 lakh. "I was not ready, but he kept calling, and were settled for Rs 4.25 lakh, with Rs 1 lakh as advance to stop the episodes from being re-shared on social media the same day (8 May)," Mehta said in his FIR registered at the Baldev Nagar Police Station in Ambala.

He said that to confirm that Rana was not faking the deal, he insisted on having a word with Sharma first. After receiving an assurance from Sharma, he handed the money over to the accused at their decided location. Mehta then gave a written complaint to the police, seeking action against Sharma and three others for extortion.

Pardeep Antal, who works as a reporter with Khabari Lal Haryana, said Sharma was a marketing professional. "He used to write on social issues on his Facebook page, which received a lot of praise. This prompted him to enter the media sector," Antal said.

He said Sharma had worked with reputed brands in marketing before starting his own magazine, Future Solution, to offer advertisement-cum-media solutions on a single platform. It became quite successful and was followed by Khabari Lal Haryana, launched on 20 February.

So far, the YouTube channel has produced 43 episodes on local civic issues, political debates, and edutainment programmes. However, on closer look, it is evident that many of the programmes regularly promote the products of advertisers under the garb of news.

Not a new phenomenon

This is not the first such incident to be reported in Haryana.

In March, the police arrested a freelance journalist after he filmed a Faridabad resident in a compromising position and demanded Rs 10 lakh to keep mum. The accused had allegedly hatched a conspiracy with a businessman who owed the victim Rs 6 lakh in a land deal.

The same month, a Kurukshetra-based journalist was arrested for smuggling people by passing them off as reporters on their way to cover the Commonwealth Games in Australia.

On 15 April, the police in Haryana's Karnal district busted a gang of blackmailers in Indri and also arrested two "journalists". According to the compliant filed at the Bayana Police Chowki, the accused, Bansi Lal, and his aide had introduced themselves as editors of Sat Samachar. The police said they had demanded Rs 10,000 from Deepak Kumar, a local quack who was practicing in the area without a licence. However, the victim informed the police and got them arrested instead.

In another such case, three months ago, two journalists, claiming to run the Tehelka News YouTube channel, were arrested from Nilokheri in Karnal district. The accused, identified as Nitin Kumar and Aman Kumar, were arrested after Dr Rakesh Dua filed a complaint, alleging that the journalists had demanded Rs 2 lakh and threatened to run a smear campaign against him. The journalists were arrested, along with two aides, while they were receiving the money.

In May, the Palwal Police arrested a fake journalist who was targeting unemployed youths by promising to get them a reporter's job in lieu of Rs 10,000. The accused, Veerpal Kumar, was caught when one Satpal Kumar registered a police complaint, alleging he had been duped.

Kamal Midha, president of the Haryana Patrakar Sangh, said they were aware of the problem. He said they had proposed setting up a district-level data bank to distinguish reporters who represent the mainstream media from self-styled journalists. A proposal has also been submitted to crack down on these "journalists" running blackmailing rackets.

The president of the Rohtak Press Club, Sunit Dhawan, said there should be a check on such YouTube channels mushrooming and self-proclaimed journalists who generate content for their platforms by putting the credibility of the media at stake. He said it was difficult for the public to differentiate between the mainstream media and "social media journalists", leading them to fall prey to unscrupulous elements.

Sat Singh is a Rohtak-based freelance writer and member of 101Reporters.com, a pan-India network of grassroots reporters.