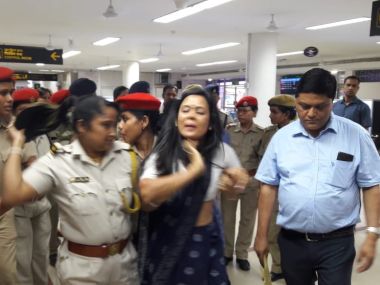 Silchar: A Trinamool Congress delegation was on Thursday detained at Silchar airport after allegedly being roughed up by the state police. The eight-member team was on a two-day state visit to assess the situation in Assam and campaign against the final draft of the National Register of Citizenship (NRC) released on Monday, which left out over 40 lakh names.

Additional Director General of Police Mukesh Agarwal on Thursday said that the TMC leaders were taken under "preventive detention" under Section 151 of the CrPC to avoid possible disruption of law and order situation in Barak Valley — especially due to the ongoing drive to conclude the NRC process. "Since prohibitory orders under Section 144 CrPC were already imposed in the district after the publication of the complete draft of the NRC, we took the delegation of the TMC MPs and MLAs under preventive detention to avoid any possible chaos here," Agarwal said.

Rajya Sabha MP Sukhendu Sekhar Roy had also alleged that the delegates, including women, were shoved around by the police. Video clips of the alleged assault were doing rounds on social media and on some television channels. Denying such allegations of physical assault, the ADGP said, "We know the constitutional importance of the Parliamentarians and Legislators and we behaved in the best benign manner we can. We have made all arrangements for their comfortable stay within the rules. Steps are being taken to send them back to respective locations in consultation with the delegation." The ADGP also informed that two lady constables were injured while trying to restore calm inside the airport.

Silchar MLA and BJP leader Dilip Kumar Paul said the TMC leaders were conspiring to create a state of unrest in the Barak Valley and in the state. “Their visit was a pre-planned part of the strategy,” he alleged. Dismissing the assault allegations, he also claimed, “The incident began with one of the journalists, who came with them, recording a video which is prohibited in an airport. Eventually, they (TMC leaders) started saying that they were beaten up, which was not true.”Sources said seven TMC members were surrounded by police officials after they disembarked the aircraft at around 1:35 pm on Thursday. They were stopped from getting out of the airport and were forced to remain in t the VIP lounge where they were joined by Hakim, who reached an hour later. The situation worsened after a series of heated arguments between TMC leaders and the police and security officials at the airport.

Reacting to the incident, TMC supremo and West Bengal chief minister Mamata Banerjee said, "There is a super Emergency in Assam. They don't want us to talk to people.”

Paul hit back saying, “Assam does not need Mamata Banerjee. The NRC issue is related to this state and she (Mamata) need not interfere. She can do whatever she likes in West Bengal, but interference in this state will not be tolerated.”

Following the incident, TMC state president Dwipen Pathak, who was the party’s only MLA in Assam, tendered his resignation in Guwahati. Pathak had earlier urged Banerjee to refrain from sending any delegation to the state. "The party did not pay heed to my suggestion and refused to understand the ground situation here. In this backdrop, it is not possible for me to remain in a party that does not value the Assamese sentiment," Pathak was quoted as saying by PTI. He added that TMC was trying to divide Assam through divisive policies and he could not act against his state. Following Pathak’s exit, two other TMC members — Pradip Pachani of Sibsagar and Diganta Saikia of Golaghat — resigned as they refused to be a part of the party “that wanted to compromise the identity of the indigenous Assamese people," the PTIreported.

Congress legislator from Karimganj North Kamalakhya Dey Purkayastha condemned the alleged assault and said that the decision to confine the TMC delegation was totally “undemocratic”. “They (TMC leaders) came to interact with the common masses regarding the NRC issue and hear the views and perspectives. There was nothing wrong in that,” he said.

He further alleged that the interaction with local people could expose various anomalies that took place in the NRC process which is why the government did not allow the delegates to step out of the airport.

While the Supreme Court has ensured that the draft shall not be the basis of any action, the process has spread panic among many who fear to lose their citizenship. Assam NRC coordinator Prateek Hajela informed the top court that the complete NRC draft will be available to the public for inspection until 7 August. The final list of the NRC will be published by December this year.