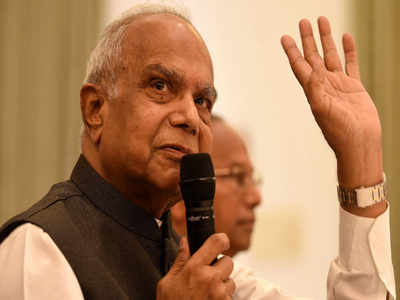 CHENNAI: In a new twist to the ongoing tussle between Tamil Nadu governor Banwarilal Purohit and the opposition parties led by the DMK over his field visits to the districts to review government departments, Raj Bhavan has threatened “imprisonment” of those preventing the governor from exercising his powers vested under the Constitution. The governor will continue to undertake such visits to the districts in future too, Raj Bhavan said in a statement on Sunday.
A statement from Raj Bhavan on Sunday reiterated that the “office of the governor” is protected under IPC Section 124. “Attempts to restrain the governor from exercising any of the lawful powers by means of criminal force or attempts to overawe such governor, shall be punished with imprisonment of up to seven years, and a fine,” the statement said.
Hitting back strongly at the threatening tone of the Raj Bhavan’s statement, DMK working president M K Stalin charged the governor with “indulging in direct politics” and condemned the threat of imprisonment.

“The DMK is against such visits by the governor to review functioning of the government departments, since it is an attempt at parallel governance. The DMK will continue to hold black flag demonstrations in its efforts to safeguard the interests of the states,” Stalin said. The Raj Bhavan missive came in the wake of the black flag demonstration held by the DMK cadres at Namakkal during governor’s visit on Friday. Several DMK partymen were taken into custody. Protesting the arrests, DMK working president M K Stalin on Saturday led a protest march towards Raj Bhavan to lay siege to the governor’s residence. Stalin, several DMK leaders and partymen and women were taken into custody and were later let off.
The institution of the governor is that of a Constitutional authority who enjoys full authority and freedom to visit any part of the state. Being the head of the executive, he enjoys unhindered freedom to meet and interact with officials of the state. “In no case so far has there been an instance of the governor criticizing the performance of any department or of giving a direction to any official, the statement said. “He (Stalin) is either ignorant of the law or attempting to overawe by threatening to besiege Raj Bhavan or block the roads leading to the Raj Bhavan,” the statement said.

In his counter argument, Stalin pointed out that such reviews by the governor is not taking place in other BJP ruled states or where a strong regional party is in power like Madhya Pradesh or West Bengal. “Even in Tamil Nadu such reviews had not taken place in the past. The Edappadi K Palaniswami government may not have the will to oppose this, given their tendency to bow before the Raj Bhavan and the BJP government at the Centre. But, DMK being a strong willed party and fighting to safeguard the rights of the states under the federal system, will continue to oppose such visits within the democratically permitted norms of protests,” Stalin said.

Meanwhile, the Guindy police on Sunday registered a case against Stalin and other party workers pertaining to their agitation against the governor. Stalin has been booked under IPC Sections 143 (unlawful assembly) and188 (Disobedience to order duly promulgated by public servant).