Stalin pens poem to Karunanidhi: ‘This one time, can I call you Appa?’

Stalin pens poem to Karunanidhi: ‘This one time, can I call you Appa?’ 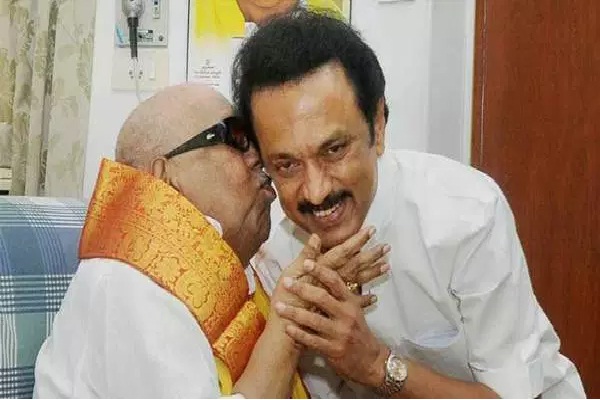 Hours after DMK president and former Tamil Nadu chief minister M Karunanidhi passed away on Tuesday, his son and political heir M K Stalin asked: “This one time, can I call you Appa?” In an emotional poem to his father, Stalin recounted how he addressed his father as ‘Thalaivare’ (leader) more than father. Karunanidhi died at Kauvery Hospital last evening, where he was admitted after his health deteriorated two weeks ago.

“Thirty three years ago you decided the words to be written upon your headstone, ‘Here lies he who worked without any rest’. Did you leave with the satisfaction of having worked for this Tamil community?” Stalin asked, adding that Karunanidhi ran non-stop for 80 years to serve the public.

“I beg for that strength and for the heart you borrowed from Aringar Anna. Will you give it to me, Thalaivare? With that charity, we will win over your unfulfilled wishes and dreams,” he wrote.

After Karunanidhi’s eldest son MK Alagiri was sidelined years ago, Stalin has emerged as the undisputed leader of the party. Currently DMK’s working president, he is likely to be bestowed with the title of president in the coming months.

Karunanidhi, who took over reins of the party in 1969 after the death of his mentor C N Annadurai. Karunanidhi was the first president of the party as the post was, prior to that, customarily left vacant for Periyar E V Ramasamy — Annadurai served as party general secretary. Karunanidhi celebrated the completion of 49 years as DMK chief on July 26 this year — the longest reigning chief of a political party in India.