Shujaat Bukhari shot dead in Kashmir: Editor who 'did journalism with pride' felled by spray of bullets

Shujaat Bukhari shot dead in Kashmir: Editor who 'did journalism with pride' felled by spray of bullets 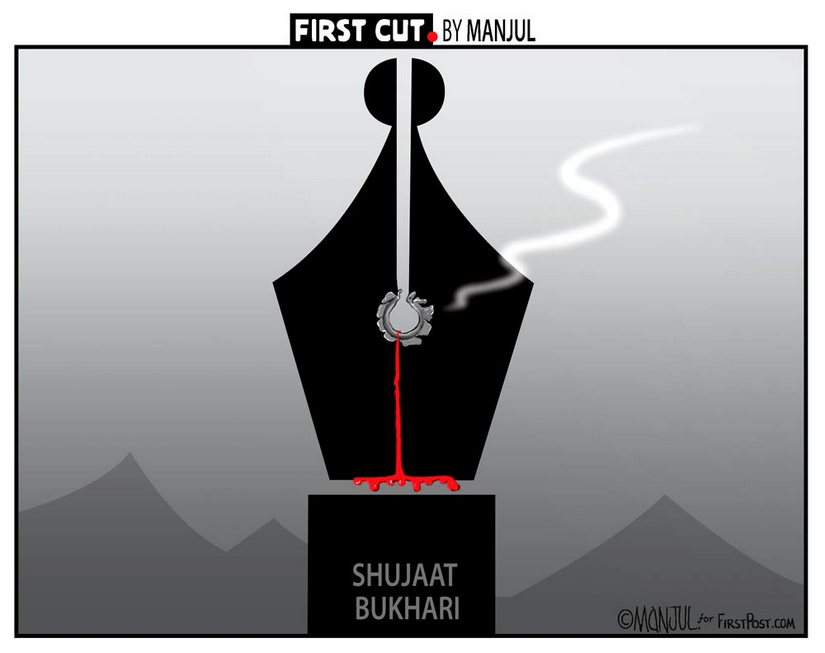 Srinagar: The road outside his office was littered with shards of glass. His Tata Hexa SUV was pockmarked with bullets. It was around 7.30 pm that Shujaat Bukhari left his Rising Kashmir office at Press Enclave, where he was working as editor-in-chief, with two policemen in tow, when he was shot at and died on the spot. Gunmen continued to fire in the air to prevent the scribe from being shifted to the hospital. When he was finally moved to the hospital by a police van, doctors declared him dead on arrival.

Shujaat is the brother of PDP MLA and law minister Syed Basharat Bukhari. He is survived by his wife, parents and two children. Bukhari had been living in Friends Enclave, Humahama, and was active in literary circles. As former president of Adbi Markaz Kamraz, Shujaat had been regularly presiding over book launch functions. He also advocated for peace in the Valley. Rising Kashmir reporter, Mansoor Peer, posted on Facebook, "At 4 pm Syed Shujaat Bukhari sir assigned me a story and I was yet to complete my story, when I got the shocking news.”

While one of the personal security officers (PSO) guarding him was killed, another policeman was injured. At the small medical facility in the police control room, tears streamed from PDP minister Basharat’s eyes.

A number of state ministers including the Deputy Chief Minister Kavinder Gupta, Finance Minister Altaf Bukhari, Roads and Buildings Minister Nayeem Akhtar visited the PCR where his body was kept. As his body was driven in an ambulance to his home town in Kreeri, the eyes of his wife and children welled up with tears.

The death was condemned by both the separatists and the mainstream  political parties. The Kashmir Editors Guild (KEG), a representative body of the journalists in Kashmir, strongly condemned what it termed “the dastardly attack on the senior journalist.”

“It is yet another shameful attack on the media in Kashmir that has been surviving with such attacks since 1989. Shujaat was shot dead while he was leaving from his office minutes ahead of iftar when a group of gunmen, apparently waiting for him to get into his car, fired a volley of bullets on his vehicle. The firing continued for a few minutes and triggered a mass scare,” it said in a statement. “Media persons contacted the police to seek help. It took the police some time to reach the spot and evacuate the injured to the hospital.”

“The media in Kashmir has been operating in a testing situation for all these decades of crisis. The intermittent killings and attacks have been adding to the crisis,” the statement said.

In the emergency meeting, KEG strongly condemned the “brutal attack". “It is tragic that every time the killers need a hit in the media, they descent down the press colony and kill. KEG is demanding a speedy investigation in the brutal attack so that killers are identified and punished...Killing journalists will not further the cause of any side but will perpetuate the crisis further. At the same time, we need to convey that Kashmir media has survived the worst situations and will survive this dastardly murder as well,” the KEG said.

Condemning the killing, Hurriyat (G) chairmanm, Syed Ali Geelani, said that it is against the 'moral and human ethics to kill a person without any justification.' Regretting such 'mysterious killings,' the Hurriyat leader said difference of opinion is 'not a reason to kill a person.'

Geelani while paying his condolences to the bereaved family of the young journalist, prayed for his eternal peace.

The chief minister described the killing of Bukhari “as highly barbaric, deplorable and condemnable.” “ His killing today has only established that violence cannot stand the scrutiny of logic and rationality,” she said in her statement adding the whole “State today stands in unanimity in condemning this inhuman act of savagery.”

Mehbooba said the “role and contribution rendered by Shujaat Bukhari in institutionalisation of the media here has become part of the journalistic history of the state. One would always see him raising issues of common cause concerning people. He would often fight for the issues of people through his columns and various discussions but alas this voice of people stands silenced today brutally”, she added in her message.

Mufti visited the hospital and paid her respects to the departed soul. She also conveyed her heartfelt sympathies with the bereaved family particularly his parents, wife and two children.

Vohra conveyed shock and  grief on the “gruesome killing” and “prayed for peace to the departed soul and strength to the bereaved family to bear the irreparable loss.”