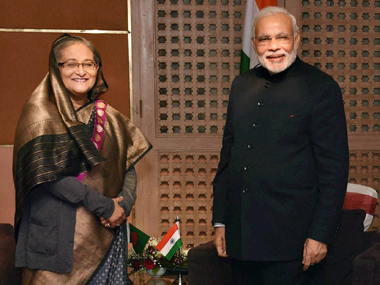 Prime Minister Narendra Modi is all set to roll out the red carpet for his Bangladesh counterpart Sheikh Hasina as she arrives today in her second visit to the country in just under two months. The Bangladesh prime minister will be visiting Shantiniketan to attend Visva-Bharati University's convocation ceremony, and thereafter hold an informal talk with Prime Minister Narendra Modi.

Hasina's 'informal visit' widely seen as part of India's renewed efforts to improve ties with neighbours on the subcontinent, is expected to throw up some unlikely topics for discussion. We take a look at some of the key issues that may feature in the "informal summit" between Modi and Hasina at Banga Bhavan in Shantiniketan this week.

The latter could be more likely happening since as the author argued, Minister of External Affairs Sushma Swaraj who recently returned from the visit to Myanmar had stressed on "safe, speedy and sustained return of displaced persons to Rakhine state".Rohingya crisis: Though the focus of Hasina's two-day visit to India is on the culture of the two neighbouring countries, as Firstpostcolumnist Shubha Singh had commented, the Bangladesh prime minister could bring up the Rohingya crisis, especially since India's stance on the issue often seemed to be "tilting in favour of Myanmar". Hasina is likely to focus on getting more financial aid (similar to Operation Insaniyat) from India, a push to resolve the issue byexpediting the return of refugees to Rakhine state is also likely on the cards.

NRC issue in Assam: Assam's National Register for Citizens is another issue that may emerge during the informal summit between Modi and Hasina. Dhaka may seek assurance from Modi that there will be no attempts for deportation.

Connectivity, power, and infrastructure: Bangladesh and India have a lot to benefit from each other from ties in infrastructure, power, and connectivity, a key element of which is the proposed Bhutan, India, and Nepal (BBIN) transport corridor. According to The Diplomat, while the corridor could allow India's North East greater connectivity via Bangladesh's infrastructure, it would allow Bangladesh access to Nepal and Bhutan via India. That Bangladesh, India, Bhutan, and Nepal went ahead with the project despite Pakistan creating obstacles, it's only pertinent that the project moves forward smoothly.

Teesta Water Dispute: During her last visit in April, India-Bangladesh signed around 22 deals and India extended a credit line of $5 billion to Dhaka. A major component of this was $500 million line of credit to for procurement of defence equipment for the Bangladesh military forces. The sore point during Hasina's April visit was the lack of progress made in the Teesta water dispute.As Singh writes in the article, Modi has promised concrete steps towards resolving the Teesta water dispute. The Bangladesh prime minister is likely to bring the topic back on the table, especially with elections in Dhaka right around the corner. A timely resolution of the issue could be a win-win for both New Delhi and Dhaka. The only bottleneck would be West Bengal chief minister Mamata Banerjee, who has been reluctant to take any step towards resolving the issue.
Source : https://www.firstpost.com/world/sheikh-hasinas-india-visit-rohingya-teesta-water-connectivity-to-feature-in-informal-summit-with-narendra-modi-4477181.html
tarun saini 0 245 2 April 4.2 Other-Other
You Can Share It :