Shashi Tharoor responds to ‘go to Pakistan’ slogans: ‘Have they started a Taliban in Hinduism?’

Shashi Tharoor responds to ‘go to Pakistan’ slogans: ‘Have they started a Taliban in Hinduism?’ 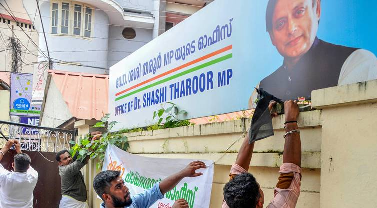 In response to slogans asking him to go to Pakistan, Shashi Tharoor asked: "Who has given them the right to decide that I am not Hindu like them and I don't have the right to stay in the country?"

Under fire for his ‘Hindu Pakistan’ remark, Congress MP Shashi Tharoor hit back at the BJP youth wing workers, saying “have they started a Taliban in Hinduism”.

Speaking at an event in Thiruvananthapuram, Tharoor on Tuesday was quoted by ANI as saying: “They (BJYM) are asking me to go to Pakistan. Who has given them the right to decide that I am not a Hindu like them and I don’t have the right to stay in the country? Have they started a Taliban in Hinduism?”

His remarks came a day after his constituency office in Kerala was vandalised on Monday. Tharoor alleged it was carried out by the BJP’s youth wing members. He BJYM members poured black engine oil on the doors, walls, signs and gate, put up offensive banners, drove away those waiting outside his office with petitions and raised slogans, asking him to go to Pakistan. The leader also added that they threatened to kill him and shut down his office.

Five people were arrested in connection with the vandalism and later released on bail.

The Yuva Morcha’s district president J R Anuraj defended their action saying Tharoor’s remark was aimed at polarising the country. Tharoor, meanwhile, tweeted, “Our politics has descended to the depths. Vandalism in the name of the ruling party is inexcusable.”

The Congress leader said India would turn into ‘Hindu Pakistan’ if the BJP returned to power in 2019. Congress’s national leadership, however, distanced itself from his remarks.