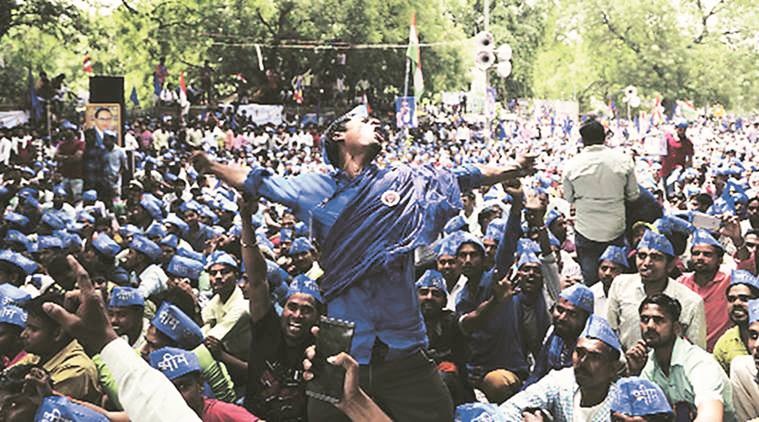 Members of Bheem Army have decided to protest at Jantar Mantar in New Delhi on August 19, to press for the withdrawal of cases against fellow outfit members lodged in jail in connection with the April 2 violence in west UP districts.

On April 2, Bheem Army workers had protested demanding changes in the Scheduled Castes and Scheduled Tribes (Prevention of Atrocities) Act. The protest will be held under the banner of ‘Bahujan Sankalp Maha Sabha’, party workers said.

“Workers have started sending applications to the concerned state governments, requesting them to withdraw cases against Bheem Army workers booked in connection with the protest on April 2. We would also be requesting the Maharastra government to withdraw cases against people booked in connection with the Bhima Koregaon violence that occurred in January,” he added.

Advocate Balakram Bouddh, who is in charge of Bheem Army’s NCR and Delhi units, said, “If the government does not listen to their demands, they will start a movement against the BJP across the country.”

“The programme on August 19 will start at around 10 am at Jantar Mantar. We will submit our memorandum of demands to the President and Prime Minister,” he added.

Bheem Army workers claimed that people across the country will reach Delhi to take part in the protest.

“We have obtained permission from Delhi Police over a week back to hold the protest. People belonging to scheduled castes, other backward classes and Muslims have been asked to reach Delhi in large numbers. We are mobilising people using social networking sites,” said Bheem Army national spokesperson Mandeep Singh Nautiyal.

In May last year, a series of violent incidents had taken place in Saharanpur after Dalits allegedly objected to loud music being played by Thakurs in a process to attend a function in honour of Maharana Pratap at Shabbirpur village. One died and 25 Dalit houses were set ablaze on May 5. Four days later, a bus, 10 motorcycles and a car were torched during violence, which also resulted in three policemen getting injured.