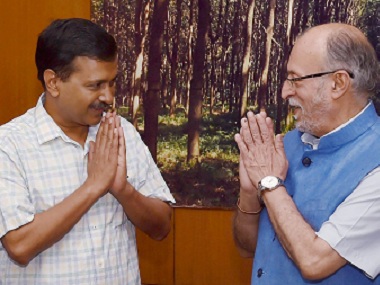 The Supreme Court (SC) on Wednesday unanimously ruled that the elected government in Delhi has the real power, not Lieutenant-Governor Anil Baijal. The verdict is no doubt a victory for Chief Minister Arvind Kejriwal and the Aam Aadmi Party (AAP).

Full statehood for Delhi may still be a distant dream for the ruling party and its leaders but it's surely an hour of jubilation for them – the powers and responsibilities of the elected government have been favourably redefined by the apex court. The L-G will now be "bound by the aid and advice of the Council of Ministers of the Government of Delhi" and cannot act independently. This means that a mere line of information to the L-G will now be enough for the chief minister to carry out whatever he wants, in respect to administration in Delhi, initiation of projects or transfer and posting of officials.

The verdict is even sweeter for AAP as it comes in the immediate aftermath of Kejriwal's 'sofa dharna' at the L-G residence. The chief minister has also settled most of the defamation cases pending against him by offering one apology after another – including to Arun Jaitley, Bikram Singh Majithia, Nitin Gadkari, Amit Sibal, Delhi Police constables, among others.

The threat of court cases, some of which could have impacted his political and personal fortunes is no longer as big. Kejriwal has also had his naturopathic sessions in Bengaluru, so health concerns shouldn't be an issue either.

The decisive verdict by the five-judge Constitution Bench of the Supreme Court, overturning an earlier Delhi High Court ruling which had ruled L-G as the 'boss' in Delhi, should ideally come as an opportunity for Kejriwal to serve the people of Delhi the way he wants, the way he always claimed he wanted to.

His government has another year-and-a-half left before Delhi goes to polls, giving him ample time and scope to deliver. The people of Delhi had, after all, voted for him with sky-high expectations.

Kejriwal has also either thrown or sidelined any and every dissenting voice within his party. There is no one in the organisational set up of the party or in the governmental to challenge him, to counter him or his decisions. The buck now stops with him. He can no longer blame his follies or non-delivery of public goods of any kind on the L-G and the Centre.

It is thus time for him to work a bit harder, to deliver all the promises he had made before the 2015 Assembly polls. He needs to put all his efforts on governance and play his part of politics a bit later in the day.

Consider the scenario as it unfolded immediately after the Supreme Court delivered its noteworthy judgment. Minutes after the verdict, AAP leaders were back playing the game they have adapted to the best in the last four-five years - playing the hero and victim card in the same go and attempting to find a fresh villain. Take party spokesperson Saurabh Bharadwaj for example. He tweeted:

In another tweet, he raised the subject of control over the Anti-Corruption Branch (ACB) of Delhi Police, which technically comes under the domain of the Delhi government.

References to former Chief Minister Sheila Dikshit's 15-year regime do not have a meaning here. She ran her government through consensus and coordination with the L-G, not through daily conflicts, badmouthing or by occupying part of the L-G’s house.

Another prominent AAP leader, Raghav Chadda, in his first statements to the media, raised the issue of control over the ACB, adding that in the political arena it was up to people as to "how they punish BJP".

It is important to understand why Kejriwal’s core team has started talking about controlling ACB only minutes after the Supreme Court judgment.

It's no secret that Kejriwal and his team have always fancied policing powers of the government. Unfortunately for him, the Constitution did not provide it to the Delhi government. MLA (then minister) Somnath Bharti’s infamous mid-night raid at Khirki extension in January 2014 and Kejriwal’s dharna at Rajpath, threatening to disrupt Republic Day parade, in his two-month long first stint as chief minister was about control or at least influencing policing and public order in Delhi. Ahead of the Punjab Assembly elections, AAP leaders, workers and sympathisers were talking, albeit in private conversations, about what Kejriwal could do if he had control over the Punjab Police.

Now turn back to 11 February, 2014. This was the day when Kejriwal did something unthinkable, even unimaginable by persons in authority. In his opinion, he had control over the Anti- Corruption Branch, which gave him the power to order filing criminal cases against anyone and proceed with further action.

He ordered an FIR against the then petroleum minister M Veerappa Moily, former minister Murli Deora and RIL chairman for alleged collusion in the hike of prices of natural gas from the KG basin. He declared that cases were to be filed under provisions of the Prevention of Corruption Act.

Kejriwal government in Delhi was then surviving on Congress' support. The move, its legality or otherwise had shocked political, legal and administrative set-ups in the capital and elsewhere. It's a different matter that a few days later, Kejriwal resigned from the post of chief minister, blaming L-G and Centre of creating a conflict. The matter thus ended there. The Centre subsequently, through an executive order, made clear that the ACB’s command remained with the L-G.

He still thinks and acts as an activist, who is in constant agitation mode. Dikshit, Saheb Singh Verma and Madan Lal Khurana before him, had worked effectively for two decades with the same system Kejriwal thought was flawed.

Kejriwal now has more power, at least as clarified by the Supreme Court, than his predecessors. It's time that he displays more positive energy and action.