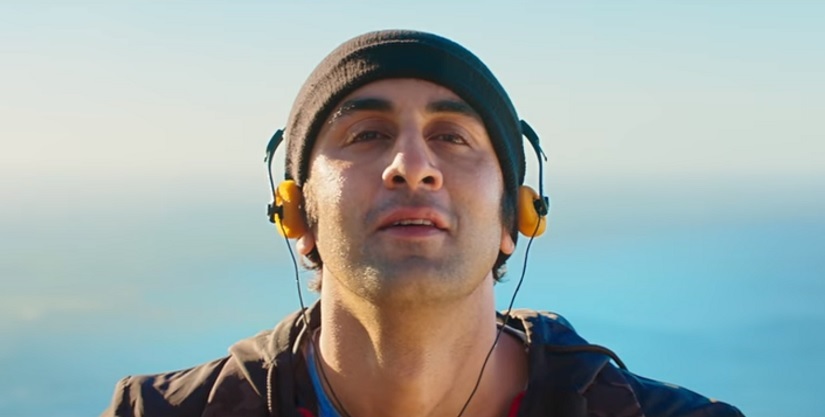 The first thing you notice about Ranbir Kapoor in Sanju isn't his uncanny similarity to Sanjay Dutt, or that he's a fantastic actor with the ability to morph into his subject like a chameleon. It is that there's absolutely nothing in Ranbir's portrayal to complain about.

This isn't merely a case of "look how easily Ranbir has slipped into Sanjay Dutt's shoes" — this is about the way in which every single aspect of the controversial actor has been imbibed by the ever-so-talented Kapoor — from his slouching walk, his goofy eyes that reveal so much pain and also a yearning for pleasure, to the way he talks (a mix of Bumbaiya and posh English) and the way he acts.

This is a meta performance. Ranbir Kapoor acts like Sanjay Dutt, who is an actor by profession; imagine the Inception-level of preparation Kapoor would have had to undergo.

Sanju is so much more than Sanjay Dutt though. And Ranbir Kapoor. Yes, the film serves primarily as a platform for Ranbir Kapoor — and his talent as an actor — to show us the intricacies of Sanjay Dutt's life. But one person's story rarely makes a good film. Sanju is as much about Paresh Rawal's restrained performance, as a helpless father torn between love for his son and his moral code.

It is as much about Manisha Koirala, Sonam Kapoor and Dia Mirza, who each play memorable characters in Dutt's life. Manisha is particularly refreshing as Nargis Dutt and it is a delight to watch her on the big screen.

Also read — Why Rajkumar Hirani's Sanju will be considered a unique film, regardless of its box office fate

The first 90 minutes of Sanju, however, belong to the heart-warming bromance between Ranbir as Dutt, and Vicky Kaushal, as his friend from the US, Kamli. It is through their friendship, and Dutt's relationship with his father, that the plot of Sanju unfurls.

Sanju presents the intimate details of Sanjay Dutt's life in a typically Hirani-esque manner. There's an emotional message in every potential scene; the film doesn't attempt to decode Sanjay Dutt or justify his life. Neither does it try to whitewash his flaws. Credit to Hirani for not painting Dutt with larger than life strokes. But there is a Bollywood-ish tinge to every scene.

Through his first shot in his debut film, and the songs he sings with his girlfriend Ruby (Sonam Kapoor); through his fight with drugs and his stint in the US, where he spends his last few moments with mother Nargis; through his moments of friendship with a real friend (Vicky Kaushal) or a fake friend who gets him hooked onto drugs (Zubin Mistry, played by the wonderful Jim Sarbh) — Sanju is a Bollywood-ised account of Sanju Dutt's life. It's dramatic, calculatingly exciting and yet, cinematic.

Sanju's biggest accomplishment are undoubtedly its performances. There are genuinely some shots where you won't be able to tell you're looking at Ranbir Kapoor, and not Sanjay Dutt. Vicky Kaushal shines, holding his own in the fun moments as well as serious scenes. Sanju is a gripping film, but one treads with caution.

Editor's pick — Ranbir Kapoor on Sanju: Not a propaganda film but an honest portrayal of a flawed human being

Caution because the agenda of Sanju is clear: to present an interesting and misunderstood story. To tell audiences that there are two sides to everything.

And there is no doubt that Sanju is a great story. Even though this is so obviously Sanjay Dutt's life account, we are told Kamlesh's perspective, as the friend of a superstar/drug addict/limelight hogger. We are told Vinnie Diaz's perspective (Anushka Sharma) — a biographer who slowly but surely falls in love with Sanjay Dutt's story.

It is the performances in Sanju that often make up for the one-dimensional writing.

Hirani makes it easier for audiences to engage with the film by broadly dividing Dutt's life into two parts — his fight with drug addiction, and the jail term for his involvement in the 1993 Mumbai blasts. But Sanjuseems stuck in its own mould. It rarely rises above the boundaries it creates for itself. Hirani sticks so close to what he knows best — mixing commercial elements into a story with potential — that Sanju ends up feel like a version of Dutt's life for children; a sanitised fable of sorts. You are very often left wanting more. What about the greys? What about the philosophical conflicts?

This gap is filled by Ranbir Kapoor — a fine performer who understands his subject matter and audience. The film best moments belong to Ranbir and Vicky Kaushal, and Ranbir and Paresh Rawal. Sanju is high on emotions, and what triumphs is friendship, trust and the beautiful bond between a father and son.

Glimpses into the film industry and the underworld are minimal. We are not given an insight into the socio-cultural context in which Sanjay Dutt's life unfolded. It would have been nice to see the world that Dutt inhabited (and now inhabits) with a little more depth. But worry not, the physicality of every character makes up for the lack of context. Each character looks their part. Aiding the narrative is a hummable soundtrack that one may not remember over time but works within the film.

Ultimately Sanju is Ranbir Kapoor and Vicky Kaushal's film. Both actors pull even the flawed parts of the film together, and neatly wrap the histrionics with flavour and variety. Sanju is an entertaining film, and has all the elements of a blockbuster — but one wishes the honesty and nuance went beyond just the performances.