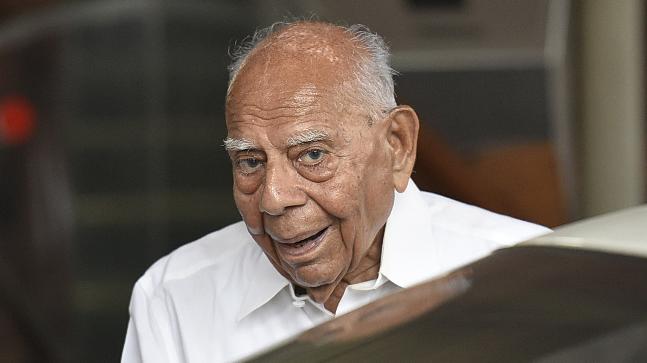 Senior lawyer Ram Jethmalani on Thursday approached the Supreme Court in his personal capacity against Karnataka Governor Vajubhai Vala's decision of inviting BJP leader BS Yeddyurappa to form a new government in the state despite being eight short of a majority in the assembly. A bench of Chief Justice Dipak Misra, Justice AM Khanwilkar and Justice DY Chandrachud asked Jethmalani to mention his plea on Friday before an appropriate bench. Speaking to India Today, Jethmalani unabashedly reasoned his actions as a bid to get rid of Narendra Modi. "I have one objective left, to get rid of Modi. I have not lost faith in the Supreme Court." Further commenting on horse-trading tactics that the BJP is being accused of indulging in, he said, "This is not horse racing, this is donkey racing. Open invitation to corruption... They can only get votes by destroying democracy." Jethmalani, who had taken retirement from law practice, told the Supreme Court bench that the Karnataka Governor's order is a "gross abuse of Constitutional power". In conversation with India Today, Ram Jethmalani added that he had no doubt over the Governor's intentions and exuded confidence in his connivance with Narendra Modi. "I don't want to get into past but my objective is to get rid of him (Modi)." The apex court early on Thursday after a midnight hearing refused to stall the swearing-in of Yeddyurappa as Karnataka's new Chief Minister. Yeddyurappa took the oath as the Chief Minister of Karnataka on Thursday at 9 am at the Raj Bhavan amid tight security. The court, however, sought the communications which Yeddyurappa had written to Karnataka Governor informing him of his election as BJP legislature party leader. The apex court said that the swearing-in is subject to the final outcome of the matter before it. Source : https://www.indiatoday.in/india/story/ram-jethmalani-just-said-his-only-aim-in-life-is-to-get-rid-of-modi-1235134-2018-05-17