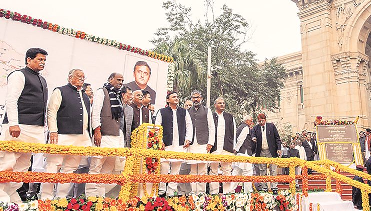 The SP has been circulating photographs of former chief minister Akhilesh Yadav laying the foundation stone on December 22, 2016. Meanwhile, UP Minister for Infrastructure and Industries, Satish Mahana, called the 2016 stone-laying ceremony fraudulent.

Two days before Prime Minister Narendra Modi is slated to lay the foundation stone of the 340 km Purvanchal Expressway at Azamgarh, the Samajwadi Party (SP) and Bharatiya Janata Party (BJP) locked horns over credit for the project.

The SP has been circulating photographs of former chief minister Akhilesh Yadav laying the foundation stone on December 22, 2016, while local party leaders held a rally in Azamgarh Thursday to stake claim over the project. Meanwhile, UP Minister for Infrastructure and Industries, Satish Mahana, called the 2016 stone-laying ceremony “farzi” (fraudulent) and claimed that the previous government had cleared tenders for the project at higher rates.

“The foundation stone of the project was laid on December 22, 2016, and about 50 per cent of land for the project was purchased during our regime. They have reduced the size of the project and have not included GST in the cost. Moreover, there is loan of Rs 12,000 crore, which has been taken from PNB at the rate of 8.30 per cent interest. There is no mention of service lane in the project. If all these things are included, the cost of present project would be over Rs 1,000 crore more than the tender floated during our regime,” said SP leader and former minister Rajendra Chaudhary.

He further said that the SP’s district unit held a public meeting in Azamgarh Thursday to oppose the foundation laying of the same project by Modi on July 14 (Saturday). The SP’s official Twitter and Facebook accounts also shared photographs of the 2016 ceremony.

Akhilesh too has accused the current BJP government of inaugurating projects that were announced or launched during the previous SP government.

Refuting the allegations, Mahana said, “Akhilesh Yadav says it was his project…but only 31 per cent of the land had been acquired when that foundation stone was laid and the tender finalised.”The minister further said, “Two years ago, the project tender was finalised at a cost which was Rs 1,515 crore higher than the cost of the tender we have finalised now. What was the reason for such a hurry? We can read between the lines now about what their actual intentions were with the additional money.”

“Woh farzi wala shilanayas tha. Kya awashyakta thi uski agar vishwas tha ki fir ayenge (That was a fraudulent ceremony. What was the need for it if he believed that he will return to power?),” he added.

On SP’s claims that the cost projected by the BJP would go up if GST was added to it, Mahana said that they had calcuated the difference after deducting tax from the previous as well as present costs. He added that the government did not change the alignment of the Purvanchal Expressway plan as it would lead to “wastage of the ex-chequer’s money” and said that Akhilesh should thank Chief Minister Yogi Adityanath for taking the project forward.

Mahana also targeted Akhilesh over the Samsung plant’s expansion project in Noida, and claimed that everything from the proposal to groundbreaking and Cabinet approval was done during the present regime.

After visiting Azamgarh, Mirzapur and Varanasi this week, Modi is scheduled to be part of a few groundbreaking ceremonies of projects in Lucknow on July 29. Mahana said he has called for a review meeting for these projects on Friday. Memorandums of Understan-ding (MoUs) for these projects were signed during the Investors’ Summit held in February this year, which was also attended by the prime minister.