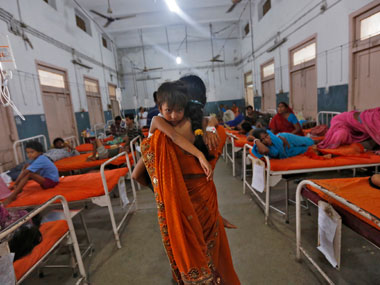 Editor's note: The deteriorating state of public healthcare in India means that an increasingly larger percentage of its citizens are being driven to the private sector for their medical needs. Mounting costs and decreasing availability of drugs is a major issue, but that's only the surface of the crisis that confronts the country. The following is the second in a three-part series that looks at a handful of factors that have hampered access to private healthcare in India.

In February last year, the National Pharmaceutical Pricing Authority capped the price of stents at Rs 29,600, as compared to the earlier cost of Rs 1.5 lakhs. However, the price of undergoing an angioplasty, which is usually charged as a "package" in corporate hospitals, has not changed significantly since then, trade experts said.

In January this year, 72-year-old Pramila Madan, was brought to a Delhi-based corporate hospital after she had bouts of vomiting and fluctuating blood pressure. She was diagnosed with a blocked blood vessels in the heart, and her family was charged Rs 3.4 lakhs, of which nearly 1.5 lakh was the "package" cost of angioplasty. The package included the charges of the Cath Lab (where angioplasty is done) but excluded the stent price, diagnostics, doctor's visit charges etc. Madan eventually died of complications in February.

In fact, a report commissioned by AdvaMed, a medical device trade association, showed that at most hospitals, including large and small private institutes, the government's decision to cap the costs of stents resulted in just 8 to 18 percent reduction in angioplasty costs, whereas the price of stents had been capped at 85 percent lower to the earlier price."We were not explained anything about the procedure," said Jitendra Madan, her husband. "We were made to sign several consent forms. We had no idea that they were inserting a stent inside her. We did not know anything about the package or about what other costs were involved." The family did not get an itemised bill after Madan's death and had to write to the hospital to get the records. They got it only in March.

Insurance companies too had said that price of the procedure has not gone down since a the price of stents were capped.

"Since the price of cardiac stents was capped last year, the cost of the procedure for the patient did not change dramatically in the initial period," said Malti Jaswal, Chief Operating Officer, Health Insurance TPA of India Ltd. "It did not have the impact it was supposed to have and there was a tendency in the hospitals to make up for the reduced price one way or the other through consumables, other charges/components of the package etc."

She added that with the revision of the cardiac stent price this year to Rs 27,890, the hospitals seem to be "coming around" and that they are noticing "better discipline" in trying not to add made up costs to the bills.

In several studies that NPPA had undertaken before finally capping the price of stents, the body observed that that highest margins were made by the hospital (654 percent on an average) before the maximum retail price was fixed. The current trend of not reducing the costs points to the hospitals' reluctance to reduce their profit margins.

So far, any attempt to regulate the private health sector in the country has been futile. The Clinical Establishment Act has been adopted by only 16 states and Union Territories, most of whom are yet to implement the Act, a Central government official said. The Central government relayed the problem related to private healthcare saying that health is a state subject and that it is up to the states to adopt the Act. The Indian Medical Association or IMA, largely made of private doctors in nearly every state have opposed the Clinical Establishment Act tooth and nail.

But an NPPA analysis of four hospital bills from National Capital Region showed that the trade margin between price to stockist and maximum retail price was up to 789 percent in the case of different kinds of syringes, and up to 450 percent in the case of consumables related to cardiac procedures such as balloons, catheters among others. Hospitals are major stockists of these products and make a very high margin.

The analysis also observed over the years, the use of non scheduled drugs has been increasing since the Drug Price Control Order 2013 was instituted.

"When the price of a drug is capped, the pharmaceutical manufacturers start marketing the same drug of a different dosage (which is not under price control) or make fixed dose combinations with scheduled drugs," said Malini Aisola, from All India Drug Action Network, a group of nonprofits that work on increasing access and affordability of drugs.

The NPPA, in its report analysing allegations of overcharging by hospitals, also noted that the expenditure on scheduled drugs is only 4.10 percent and that of non-scheduled drugs is 25.67 percent. "It is clear that for higher margins, doctors/hospitals preferred prescribing and dispensing non-scheduled branded medicines instead of scheduled medicines ..(that) are supposed to cover all essential medicines," the report said.