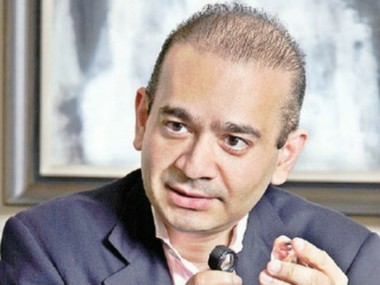 New Delhi: Despite news from Intelligence of reported sightings of Nirav Modi in the last few days, the whereabouts of the fugitive diamantaire continues to remain a mystery. Indian agencies investigating the Rs 14,000 Punjab National Bank (PNB) scam are dependent on Interpol to gather information on Modi's movements. However, they believe the one person can provide them with the fugitive diamantaire's exact location is Mihir Bhansali who is Modi's right-hand man and his keeper of secrets.

Bhansali, who lives in a $7 million Manhattan apartment overlooking the sublime Hudson River, was not only the top executive of Firestar Diamond but also an active collaborator helping Modi pull off the biggest fraud in the Indian banking history, sources told Firstpost.

“Apart from Nirav Modi, Mihir Bhansali is perhaps the only person who knew how and where the money siphoned off from Punjab National Bank was being parked in shell firms. He is suspected to be in touch with Modi amid some reports last month that he moved out of Belgium.

"We would like to question Bhansali not just to drag Modi out of the hole he is hiding but also with regard to the huge amount of money the duo moved by producing fake bills through a maze of shell companies. We have gathered some information on at least two companies and Bhansali could provide details of the organised financial crime around the world,” sources said.

Bhansali, sources claimed, is suspected to have acted as a proxy for Modi in buying several properties in New York City including a deluxe apartment in Park Avenue. He was also said to be handling the import-export operations of over two dozen companies while taking care of day-to-day operations of Modi's empire that created and shut down shell firms easily. Five days after the Central Bureau of Investigation (CBI) FIR in the PNB scam, Modi transferred a small amount of Rs 3 crore from the US to Hong Kong using a little-known company, sources claimed.

According to sources, a shell company by the name of Fancy Creations housed at 602, Chinese Bank Building in Hong Kong was extensively used by Modi to move funds using bogus invoices for cleaving, bruting and polishing diamonds. Fancy Creations, investigators said, was raising a huge amount of bogus invoices on Firestar Diamonds since 2014-15 to facilitate the transfer of ill-gotten money by defrauding the state-owned bank. In July 2016, an invoice of Rs 10 crore was raised against an alleged bogus bill.On the face of it, the transaction appears to be a purely commercial deal for turning a rough stone into a beautiful gem. However, after unraveling threads of many such deals, investigators have stumbled upon a well-oiled circuitous route that was used by the fugitive diamantaire to channelise money collected through fraudulent Letters of Undertaking (LoUs). The modus-operandi is baffling -- using fake invoices, fake courier bills to move money from one jurisdiction to another.

Subsequently, three more invoices were sent to legitimise the illegal transaction. The company was using accounts in at least three banks -- Industrial and Commercial Bank of China, Chong Hing Bank Limited, and Bank of East Asia -- to receive and further transfer the funds to Modi’s other entities.

"It is clear Fancy Creations had no other business other than cleaning money got through fraudulent means. These transactions are beside the 150 other transactions that were executed by Nirav Modi using Sino Traders, Aura Gems and Tri Color Gems between February-May 2017 and details were incorporated in the first charge sheet. The fresh details indicate there are wheels within the wheels," sources said.

Modi further used Nipur BVBA, a Belgium based company to move money from India, Hong Kong, and the US to Antwerp where he is suspected to be holed up after fleeing London in June. The company housed on the third floor of Hoveniersstraat 30, an import-export hub was used to channelise money from India and Hong Kong. The alleged bogus invoices were split into small amounts of Rs 1.5 to Rs 2 crore to avoid the penetrating eyes of authorities.

Nipur BVBA, run by Modi’s father Deepak Modi was using JP Morgan Chase Bank, ABN Amro, and the Antwerp branch of Bank of India -- an Indian public sector bank, to move money from one territory to another on the pretext of the sale of cut and polished diamonds by fraudulently obtaining 1,208 LoUs since 2011. Interestingly, Nirav Modi duped the Bank of India's London branch to the tune of Rs 2.5 crore in November 2017.

In 2012, the Bank of India's London branch had signed an agreement with Firestar Diamond FZE, Modi's company in the Dubai Airport Free Zone to provide secured foreign currency for his business activities. The company is still awaiting the last payment which was suspected to be an insider transaction--from one company to another--from India to Dubai and finally to the US.

“The layered transactions in Nipur BVBA account continued even after the CBI filed an FIR in the case. The company is learnt to have raised the bill on Nirav Modi’s other shell companies till April-May 2018,” said sources privy to the ongoing probe. The money was also moved using five subsidiaries of Firestar International Private Limited--- Firestar Diamond BVBA, Belgium; Firestar Diamond FZE, UAE; Firestar Diamond LLC, Armenia; Firestar Diamond Limited, Russia; and Nirav Modi Ltd based in Macau.

Investigators have now found out that after defrauding the PNB, Modi and his team were planning to dupe the public. Just weeks before the PNB scam triggered a storm, the parent company -- at the extraordinary general meeting on 8 December 2017 -- had decided to convert it from a private limited to a public limited company. The company's resolution reviewed by Firspost shows Modi was using the façade of expanding business activities to seek additional funds from the public. However, the chance discovery at PNB's Brady House branch following insistence from Firestar Diamonds' officers to obtain LoUs disrupted the game plan.