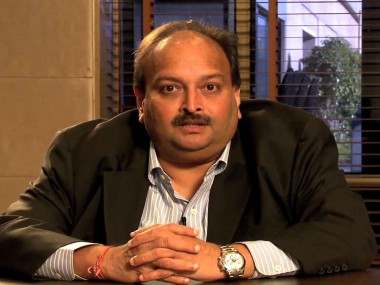 A special court in Mumbai has issued a non-bailable warrant against Gitanjali Gems owner Mehul Choksi, accused of perpetrating the $2 billion Punjab National Bank (PNB) scam with nephew Nirav Modi, according to a media report.

The special Prevention of Money Laundering Act (PMLA) court has also issued non-bailable warrants against five other people accused in the scam, reported India Today. The names of the five are unavailable at present.
The latest development comes days after it was reported that the Enforcement Directorate (ED) was set to move the court seeking a 'fugitive economic offender' tag for Choksi, and confiscate his assets, worth over Rs 6,000 crore.

On 3 July, the PMLA court took cognisance of a criminal prosecution complaint - a chargesheet - filed by the ED against Choksi and 13 others on 28 June under the anti-money laundering law.

The ED has also filed a chargesheet against Modi and has obtained a 'red corner notice, or global arrest warrant issued by the Interpol, against the fugitive diamantaire.
28 July's chargesheet

The total proceeds of the crime in this case is Rs 6,097.63 crore, the ED said in the chargesheet.

The agency said that its investigation revealed that "goods exported from India (by Choksi's firms) were of abysmally low quality but the value was highly inflated."