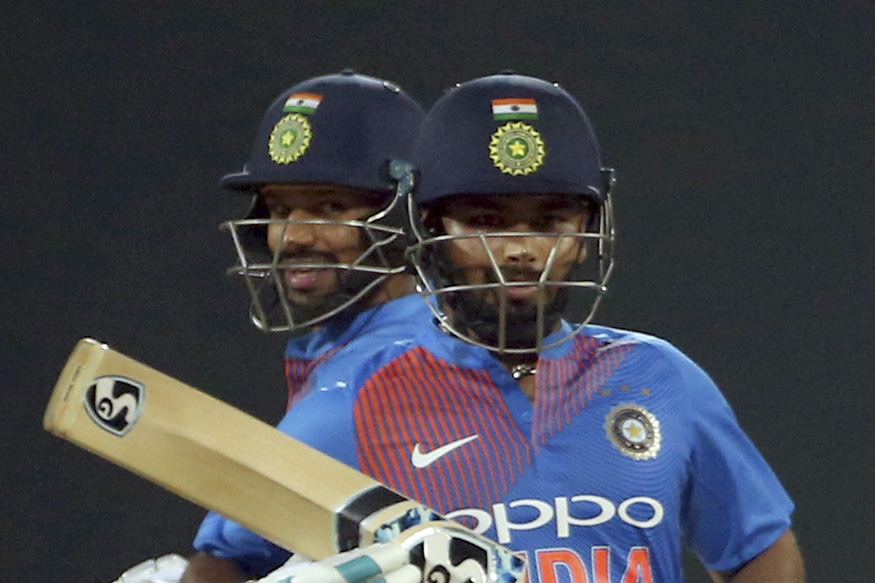 India beat the West Indies by 6 wickets in the third Twenty20 international at the MA Chidambaram Stadium in Chennai on Sunday, completing a 3-0 clean-sweep of the T20 series.

A 130-run partnership between Shikhar Dhawan (92) and Rishabh Pant (58) was enough to take India home as they successfully chased down a stiff target of 182, although the match came down to the final ball after both set batsmen departed towards the end of the game.

With 7 runs needed off 11 balls, Pant was clean bowled trying to needlessly scoop a yorker-length delivery from Keemo Paul.

Dhawan’s departure was another case of a needless shot, as the southpaw – who registered his highest-ever score in T20Is – smacked a wide ball straight from Fabian Allen down the throat of Kieron Pollard at long-on.

With just one ball remaining, India had two new batsmen in Manish Pandey and Dinesh Karthik out in the middle. It was the former who took strike and his defensive shot was enough for the two batsmen to scamper through to get the winning run.

Allen seemed on the verge of tears at the end of the match but the youngster had done extremely well to even keep his side in the game in the final over, especially given the touch both Dhawan and Pant were in.

India lost both Rohit Sharma and KL Rahul within the powerplay and were in dire need of a partnership in order to bring the chase back on track.

The Delhi boys took some time to assess the situation before getting down to business. Both looked for boundaries on a regular basis and Dhawan at one point looked to be cruising towards a century.

In the end, neither of the two batsmen who did the bulk of the work were around to hit the winning runs but their efforts were enough to ensure that the match didn’t end up going into a Super Over.

Earlier, Windies skipper Carlos Brathwaite won the toss and chose to bat first. Shimron Hetmyer and Shai Hope wasted little time in taking on the Indian attack that was without Jasprit Bumrah and Kuldeep Yadav.

The powerplays saw the batsmen find the boundary ropes with ease and at the end of the first 6 overs, the visitors had already scored 51 runs.

This prompted Rohit Sharma to bring on Yuzvendra Chahal and the move paid off instantly as the leg-spinner got rid of Hope by forcing him to top edge the very first ball he bowled.

The wicket brought the Windies’ free-scoring to a halt and Chahal struck another crucial blow in the 10th over when a short ball took Hetmyer’s top edge, leaving Krunal Pandya to take a simple catch.

Darren Bravo and Denesh Ramdin looked to score at a consistent rate but the latter would eventually be dismissed by Washington Sundar.

However, Ramdin’s departure brought Nicholas Pooran to the crease. The 23-year old, playing in only his 5th T20I, proceeded to take on the Indian bowlers and turn the match completely on its head.

On a surface that wasn’t the easiest to bat on, Pooran scored 53 runs with some innovative hitting that saw Windies put up a competitive total that, in the end, wasn’t enough to get the job done.