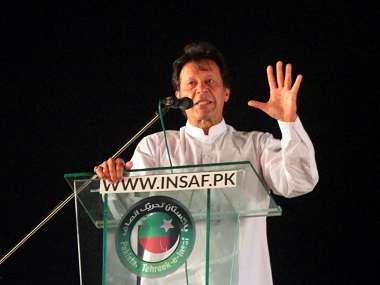 As Pakistan announced 25 July to be the date for holding General Elections in the country, all eyes have turned to cricket star-turned-politician Imran Khan, who has expressed hope of winning the polls. The general elections are largely expected to pit the PML-N against its main rival, the Pakistan Tehreek-e-Insaf (PTI) party led by Khan.

Khan has also vowed to oust the country's "corrupt" rulers and is hoping to achieve the dream of leading the country as its prime minister. He has also said that his party is better prepared for elections this time than it was in 2013.While PTI is vowing to clean up the country's rampant corruption, and invest in education and healthcare, PML-N continues to boast of its investment in the country’s rickety infrastructure and courting billions of dollars in Chinese investment.

PTI leaders have said they are confident that they will be able to defeat the PML-N.

"The Pakistani nation... can see the dawn of a new Pakistan, which will not be ruled by the corrupt," the party said in a statement posted Sunday on Twitter along with a graphic that read "Mafia's Game Over".

In another post, PTI said that 25 July will be written in history as the day of the making of "naya Pakistan" under the leadership of Imran Khan.

Khan had, in April, unveiled his party's 11-point agenda to turn the country into a "naya Pakistan" at a rally in Lahore.

Addressing a large public gathering at Minar-e-Pakistan, he announced the agenda for the upcoming general election which, according to him, will help establish "one system of justice, reduce poverty and elevate the living standards of the poor".

Khan lamented that today's Pakistan was neither the vision of Muhammad Ali Jinnah nor Allama Iqbal. The Quaid, he said, had dreamt of a country where all citizens, including all minorities, had equal rights.

Pakistan, Khan said, must choose between dishonour and dignity.

He said elimination of corruption, self-reliance, health and education were the top priorities of his party, Geo News reported.

He vowed to introduce a health insurance system modelled on the "Sehat Sahulat" card in Khyber Pakhtunkhwa region for the poor across Pakistan.

Khan has also unveiled a 100-day plan if his party is voted to power. The plan outlines all the major goals that the PTI hopes to achieve in the first 100 days of its governance, if voted to power.

Khan also has a 100-day agenda if his party comes to power. Geo News quoted him as saying, "the first 100 days of the PTI government will be reflective of the party’s ideology and policies."

The 100-day plan presents the idea of generating 10 million jobs within five years. It also aims to give complete autonomy to Southern Punjab, the report added.

All policies under this 100 days agenda will look into how to make education, employment and other basic rights accessible to the common man, Khan was quoted as saying by Dawn.

Khan also said that he envisions a Pakistan in which a leader is accountable even for the death of an animal.

Also part of the agenda is to offer incentives to facilitate growth. Party leader Asad Umar said that the incentives would include reduction in taxes, realigning energy prices in line with regional competitors, clear the backlog of refunds and rebates, according to The Express Tribune.

The party also plans to improve the tourism industry and convert all government guest houses into hotels, the report adde.