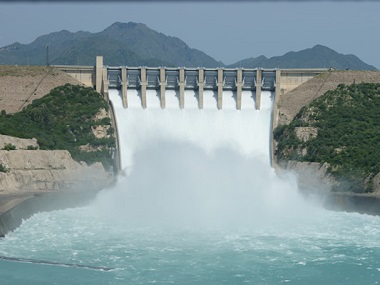 This is a subject that often goes unnoticed when reported by the Pakistani press — major dams like the Tarbela and Mangla have both reached the point of dead storage, at a time when farmers desperately need their water for the newly-sown Kharif crops. The Indus River Systems Authority (IRSA) has already sounded an alarm, and in a letter to the governments of Punjab and Sindh, has called for contingency plans not only to take care of the present crops, but also to deal with likely shortages in the Rabi season ahead. This is very serious business for Pakistan's food security and on the ground, for the farmers of Sindh and Punjab.

At the same time, a snippet that attracted great interest among political and intelligence analysts was the Lashkar-e-Taiba (LeT) launching its election campaign through its political front, the Allahu Akbar Tehreek. LeT chief Hafiz Saeed — a UN-designated terrorist with a bounty of $10 million — has addressed huge rallies in Lahore, Islamabad, Sahiwal, Sargodha, Faisalabad and Jhang. His central message was to "vote for those who can stop India from building dams on Pakistan's rivers so Pakistan does not face a water crisis in the days to come, safeguard the two-nation ideology and help Kashmiris get freedom and make the country a strong citadel of Islam".

Recent data released by the IRSA indicates that unusually low temperatures in Skardu in Pakistan's Gilgit-Baltistan region has resulted in very low inflows into the Tarbela and Mangla dams, which feed the canal system in Punjab and Sindh. Apart from this, the water level in other sources in the Indus River Basin has also been steadily dropping, overall by 179 percent. This includes the Kabul river, the flow of which has declined by 11 percent, as has the flow from rivers from India. The Jhelum has always had a sluggish flow, while the flow of the Chenab river is said to have reduced 41 percent over the years. Ironically, it is probably this river from India that is likely to be the only "save" for Pakistani farmers at the moment after the recent monsoons.Saeed certainly has been focusing on this issue for quite a while, accusing India frequently of stealing waters meant for Pakistan. The trouble is that this time around, he may well strike a chord as Pakistan may be in serious trouble.

IRSA is not alarmed in the least, even though recent reports by experts have warned that Pakistan is likely to become the most water-stressed country in the region by 2025. Reports from the International Monetary Fund, Asia Foundation and the United Nations Development Programme have all pointed to a drastic drop in water availability. One factor here is climate change, which includes reduced rainfall and higher temperatures in the extreme north in Gilgit-Baltistan. So an area that is not an administrative part of Pakistan, with the only "stateless" people in the world, provides the country with a large part of its most vital resource — water.

Gilgit-Baltistan contains the only perennial glaciated areas outside the polar region and constitutes about 28 percent of the total land mass. That alone should be enough. But the trouble is that temperature fluctuations, particularly warmer summers, means that it is also the source of the severe flooding that hits the north intermittently. Several of the more than 5,000 glaciers are also retreating, not only because of global warming, but local conditions, too. That is bad news for everyone from Pakistan-occupied Kashmir to the badlands of Balochistan.

Pakistan actually has no business being a water-starved country. Apart from the glaciers, it was once blessed with abundant water resources and a canal system that was the envy of neighbouring India. But it is also a geographic fact that these resources are limited to only the provinces that lie along the grand old Indus river, while the rest are largely dependent on the monsoons. Rainfall, about 60 percent of which is usually received between July and September, contributed about 13 percent to the water that goes into the canal diversions. Given the extreme variability in the monsoons in the last decade, this means that a staggering 92 percent of Pakistan is classified as arid or semi-arid. Yet, as the Asia Foundation notes, approximately 95 percent of Pakistan's water is used for agriculture, with 60 percent of its population directly involved in agriculture and livestock and 80 percent of exports based on these sectors.

This means that the water crisis has become a huge political issue. Given that each province is now dominated by a single political party — the Pakistan Peoples Party in Sindh, the Pakistan Tehreek-i-Insaf (to an extent) in Khyber Pakhtunkhwa and the Pakistan Muslim League-Nawaz (PML-N) in Punjab — the scope for divisions are apparent. When that happens, a future government at the Centre is likely to be forced to take up the issue of water allocations with some with enthusiasm.

The Pakistani government is hardly unaware of the looming danger. Its Ministry of Water Resources recently brought out a water policy that, rather sensibly, argues that water availability can be dealt with through a reduction in water loss — rampant in both the Indian and Pakistani distribution systems — recycling, desalinisation plants and more water storage through medium and small dams. It is a well-thought-out plan with specific timelines and oversight mechanisms.

The trouble is that all of this will take time. Meanwhile, it is the "India factor" that will be highlighted, particularly by the religious extremist groups who are now fanning across the country under several different brands. The LeT will be at the forefront of this, both under its own banner and through several independent candidates. And when that happens, parties like the PML(N), the manifesto of which does not mention renegotiating the Indus Waters Treaty with India, will be forced to take up the issue on a more extreme platform. In the upcoming elections and later, one can expect the Indus Waters Treaty to become a "core issue" along with the Kashmir dispute. After all, that is where the water comes from. The people are only a distraction in a bilateral fight that could get considerably more dangerous.