Nitish Kumar's Party Talks Of PM Modi's Corruption Slogan. It Is A Jibe

Nitish Kumar's Party Talks Of PM Modi's Corruption Slogan. It Is A Jibe 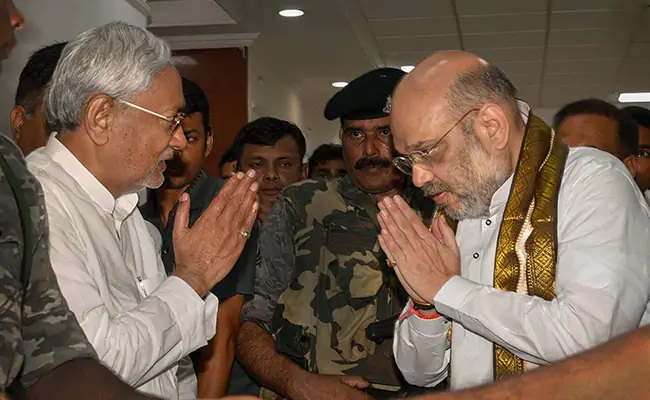 PATNA: Angered at a delay in giving permission to prosecute a railway official in a railway scam probe involving Lalu Yadav and his family, Nitish Kumar's Janata Dal United has sharply reminded the BJP-led national coalition of Prime Minister Narendra Modi's slogan on corruption and demanded that it walk the talk.
In this case, Lalu Yadav has been charged with facilitating, as the country's Railways Minister in 2006, a contract to a private company to run hotels, in exchange for the land as bribe. The land was first transferred to the wife of a lawmaker of Lalu Yadav's party, Sarla Gupta, who signed it over to his wife Rabri Devi and son Tejashwi at a vastly reduced price.

The federal probe agency, Central Bureau of Investigation, had filed charges against them in April this year. But the trial court has not been able to take up the charge-sheet because the railways ministry hadn't sent across sanction to prosecute a senior rail official RK Aggarwal.

As news of the delay emerged, JDU national spokesperson KC Tyagi took a stinging swipe at the centre.

"PM Modi always used to say that he won't allow corruption (na khaunga, na khane dunga). But in this particular case, by delaying the sanction the trial is being delayed," he said, invoking PM Modi's election slogan that has been cited by opposition leaders such as Congress chief Rahul Gandhi to target the government.

The JDU's criticism prompted the BJP to launch a damage control exercise in Bihar.

Senior BJP leader and Nitish Kumar's deputy Sushil Modi promptly responded to the jibe, insisting that the Rail Minister Piyush Goyal couldn't be blamed for the time taken to process the approvals.

Mr Modi called allegations that the centre was going slow on Lalu Yadav "baseless", insisting that the prosecution sanctions would certainly reach the CBI before the next date of court hearing on July 27.

In Bihar's political circles, there has been speculation that the centre could have deliberately held back approvals to humour Lalu Yadav so that he doesn't team up with Nitish Kumar again. This would, it has been suggested, discourage Nitish Kumar from looking at options outside the NDA even if he is unhappy.

Deputy Chief Minister Sushil Modi also amped up his attack on the Rashtriya Janata Dal founder Lalu Yadav who is out on bail on medical grounds and demanded that the 70-year-old leader be hauled back to jail to serve his sentence in four corruption cases.

"Lalu Prasad was granted bail on condition of staying away from any type of political activity. However, he has been violating the bail conditions. First, he interacted with Congress leader Ashok Gehlot and then he held discussions with TDP MPs", Mr Modi said in a statement.
Mr Gehlot, who was in the Bihar capital last week, had met the RJD chief on July 12.