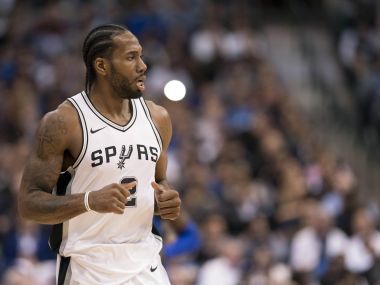 Disgruntled San Antonio playmaker Kawhi Leonard is going to the Toronto Raptors in a blockbuster NBA trade deal sending DeMar DeRozan to the Spurs, the Raptors and Spurs confirmed Wednesday.

The Spurs medical staff cleared Leonard to return to the team but the 27-year-old forward received a second opinion from his own doctors that said he needed more rehbailitation.Leonard played in only nine games for the Spurs last season, missing the first 27 games of the campaign with a right quadriceps injury, then suffering a left shoulder injury.

As he stayed away, the Spurs struggled. Teammates asked him to return but he stayed away and the Spurs were ousted by eventual champion Golden State in the first round of the playoffs.

The Raptors, meanwhile, had the best record in the Eastern Conference and were top seeds before being swept out of the playoffs by eventual runner-up Cleveland. DeRozan and others were criticised for their playoff flop after the best season in club history.

Leonard, who was NBA Finals Most Valuable Player when helping the Spurs to the 2014 title, has averaged 16.3 points, 6.2 rebounds and 2.3 assists over seven NBA seasons, all with the Spurs, and averaged a career-best 25.5 points a game in the 2016-17 campaign.

Leonard doesn't want to play in Toronto, ESPN reported, but stands to make $20 million next season and seems to have no health concerns, indicating he might attend the USA national team camp next week in Las Vegas. Spurs coach Gregg Popovich is the US national team coach.

DeRozan reacted in an Instagram posting early on Wednesday, seeming to say the Raptors told him he wouldn't be sent to San Antonio in a Leonard swap only to have it happen.

"Told one thing and the outcome another. Can't trust 'em. Ain't no loyalty in this game. Sell you out quick for a little bit of nothing," DeRozan said. "Soon you'll understand."

While the Raptors risk losing Leonard after one season when he becomes a free agent, DeRozan signed a five-year deal with the Raptors worth $139 million in 2016.

Leonard, who is from Los Angeles, was a target of the Los Angeles Lakers, who added Cleveland Cavaliers superstar LeBron James earlier this month and have saved back salary cap money for free agents for 2019, potentially with an eye on Leonard.

Poeltl, 22, had 6.9 points and 4.8 rebounds last season for the Raptors in his second NBA campaign.

Green averaged 9.1 points, 3.5 rebounds and 1.7 assists in 520 games for the Spurs, helping them to the 2014 crown after starting his NBA career in Cleveland.

San Antonio, can't express the LOVE I have for you, the city, the fans & the organization," Green wrote in an Instagram posting. "I want to thank you all for allowing me to be a part of something AMAZING for so many years.