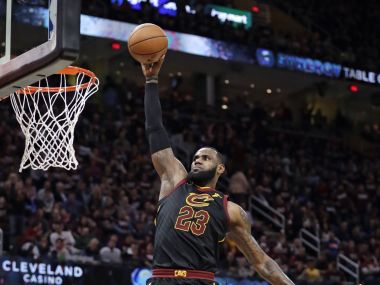 Cleveland, Ohio: There may still be at least two games left for the NBA Championship to be decided, but it seems likely that whoever the winners are, their trophy parade will not pass through the White House this season.

This became apparent during the On-Court Media Availability Day on Tuesday (early Wednesday in India), a day before Game 3, as the question of whether the winning team, be it Cleveland Cavaliers or Golden State Warriors, will visit the White House dominated the agenda. The Warriors currently lead 2-0.

The issue flared up after US President Donald Trump rescinded his invitation to the American football franchise Philadelphia Eagles to celebrate their Super Bowl title at the White House on Tuesday. It is learnt that Trump's decision was made after he learnt that only a few players of the NFL franchise were going to visit the White House anyway.

With the NFL champions not visiting the White House, naturally the focus quickly turned on whether the NBA champions would want to make the visit.

"I know no matter who wins this series, no one wants the invite anyway. So it won't be Golden State or Cleveland going," LeBron James declared. The 33-year-old admitted that he had only just learnt about the Eagles' invitation being rescinded while on his way to the press conference on Tuesday, but said he was not surprised by Trump's action. "It's typical of him. I'm not surprised. "He went on to add: "I think as long as he's in office, then the communication and things like that are going to continue to happen. It's a lot of things that we believe in as Americans that we don't feel that he's for. There are a lot of people that believe that he's not for the people or doing things that's right by the people.

"So it's not surprising hearing the news today with the Eagles. But I think more importantly, as Americans and especially people in Philadelphia, we shouldn't let someone uninviting you to their house take away from what that unbelievable team did and accomplished... I think the championship – winning a Super Bowl or winning a Stanley Cup or winning a World Series or winning an NBA Championship or National Championship – is way bigger than getting invited to the White House, especially with him in there, in my opinion," said James, who later added that it was laughable that Minnesota Lynx, who won the Women's NBA title this year, were not even extended the courtesy of an invite.

Warriors coach Steve Kerr also took aim at Trump on Tuesday, accusing him of dividing Americans for political gain. "It's not surprising. I think the President has made it pretty clear he's going to try to divide us, all of us in this country, for political gain. It's just the way it is. I think we all look forward to the day when we can go back to just having a celebration of athletic achievement and celebrate Americans for their achievement, their good deeds. The irony is that the Eagles have been nothing but fantastic citizens in their own community. They've done so much good. I've read a lot about their team," he said before adding, "It will be nice when we can just get back to normal in three years."

According to media reports, African-American players from the Eagles had unequivocally decided to boycott the White House visit in Tuesday. Trump had rubbed many American football players the wrong way with his tirades on Twitter against players taking the knee during the national anthem to protest racial injustice and police brutality.

Trump, who has previously suggested that players taking the knee during the anthem be "dragged off the field", had slammed the NFL's new rule which mandates that players stand up for the anthem, but allowed them to stay in the locker room should they so wish.

"We have a lot of freedom in our country. Guys – male or female – have the right to do what they want to do in a very respectful manner. I think if they decided they don't want to go, then they have the right," James said on Tuesday.

It must be noted that James had lampooned Trump – branding him a "bum" back in a 2017 tweet backing Stephen Curry's choice to not go to the White House after the Warriors NBA title.
"U bum @StephenCurry30 already said he ain't going! So therefore ain't no invite. Going to White House was a great honor until you showed up!" James had tweeted after Trump had rescinded the Warriors' invite over Curry's comments on visiting the White House.

Curry, on Tuesday, said that he agreed with James. "I hope to be in that situation and win two more games where we win a championship and obviously know what comes with that. But I agree with LeBron. Pretty sure the way we handled things last year, (we will) kind of stay consistent with that. But at the end of the day, like I said, every team has an opportunity to make a decision for themselves and speak for themselves. I think that's powerful, being in this situation."

Curry's teammate Kevin Durant said, "What else do you expect Trump to do? When somebody says they don't want to come to the White House, he disinvites them so the photo op don't look bad. We get it at this point. It's good that guys are sticking to what they believe in and what they want to do. Like guys said before me, I'm sure whoever wins this series won't be going."

It seems that the NBA stars versus the President matchup will get as much attention in the coming days as Warriors versus Cavaliers.