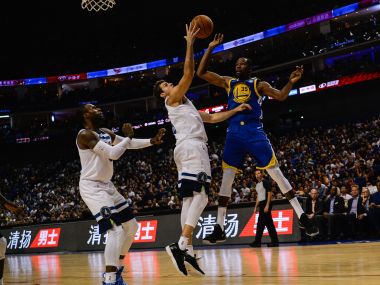 When it seemed certain that the Golden State Warriors were going to win Game 4 of the NBA Finals and sweep their way to a consecutive title, the only remaining suspense was of the Finals MVP.

Kevin Durant and Stephen Curry had both contributed equally in the first two games. Durant overwhelmed the Cavaliers with his Game 3 performance, while Curry hammered the final nail in the coffin in Game 4. Durant was the reigning Finals MVP and an addition to the team; Curry had never won a Finals MVP award but has been the engine behind Golden State’s success for years.

Eventually, a 7-4 vote from the media handed the trophy to Durant for the second consecutive year. It was not an uncontentious decision, but when he was questioned about it, Durant shifted the focus from himself to the larger unit.

“Steph knows he played a great game,” Durant said. “Without him, we don’t win. He knows that. I know that. We all know that. We stand firm in that. So trophies and accolades and praise, that doesn’t matter when we win. We know we’re all contributing something in a special way.”

The loudest word that rings from that quote isn’t ‘game’, or ‘win’, or ‘trophies’. It’s the plural pronoun of self. We.

Durant knows, as does Curry, as does Draymond Green and Klay Thompson and Andre Iguodala. The role players who stepped up at various points in the season — Shaun Livingston, JaVale McGee, David West, Jordan Bell, Quinn Cook, Nick Young, and more — are aware of the importance of their contributions to the unit. Coach Steve Kerr, GM Bob Myers and owners Joe Lacob and Peter Guber understand that building a great team — a true NBA dynasty — isn’t about the individual. This is why, for years, the Warriors' motto in the playoffs has been ‘Strength in Numbers’. They have always been about ‘we’.

The Warriors’ indomitable success — three championships in four years, plus a 73-9 season — hasn’t come because of their star power alone. They are among the greatest teams in NBA history because the stars work as a collective, where each piece is a building block to complete a complicated, beautiful jigsaw puzzle.

This philosophy is most visible on the court in the way the Warriors go about their business, dismantling teams on both sides of the floor. Their offence is the most share-happy in the league. For four consecutive years—all Finals appearances—the Warriors have led the NBA in assists, even though none of their individual players have finished among the top five in the category in the same period. This is not a team that relies on one person to create their offence; everyone passes and everyone moves, until the team finds the right shot. Durant’s singular brilliance became the cherry on top, giving them the ability to turn into a transcendent individual offensive force whenever the motion broke down.

They are equally fluid on defence. While Golden State have been known for their shooting and scoring, the larger reason for their sustained success has been their development into one of the most efficient teams on the defensive ends over the past four years. The secret of their defensive prowess is again motion and switching. The Warriors switch everything¸ and almost everyone on court is capable of guarding almost anyone. In the past, opponents chose to single out Curry as the defensive weaklink and attack him on switches; in these Finals, however, Curry got matched up on such switches numerous times against LeBron James and held his own. In this system, everyone is accountable for guarding everyone else.

It was in LeBron and the Cavaliers that the world saw the ultimate antithesis to the Warriors philosophy. Cleveland were as close as one could possibly get to a one-man team in modern basketball. Without LeBron, this was a squad heading for the lottery. With LeBron, they got into the Finals. According to reports, LeBron contributed to an incredible 32 percent of all of Cleveland’s statistics during the playoffs. No player has carried this heavy a load in 40 years.

LeBron’s individual brilliance was good enough to bring the Cavaliers through a weak and injury-riddled Eastern Conference, but it was a wake-up call against the loaded Warriors. Who knows how the Finals would’ve unfolded had fortune favoured the Cavs in Game 1 — LeBron’s epic 51-8-8 masterpiece — but the rest of the series was a relatively easy sweep by the Golden State.

Game 1 was an interesting tipping point for the Warriors, and further proof that — despite their brilliance — they are not completely unstoppable. After the 2017 title, they seemed to be lethargic this season, having their worst regular season since their Finals’ runs (58 wins), missing Curry to injury for a major chunk of time, being tested to seven nerve-wracking games against the Rockets in the Conference Finals, and nearly dropping that classic Game 1 at home.

But what makes these Warriors truly special isn’t just their potential to win; it’s actually achieving those victories. Everyone assumed that a team that had a 73-9 season and added Kevin Durant would be unstoppable. And then, they went about and fulfilled that prophecy. Regardless of any excuses, dramas, ‘ifs’ and ‘buts’, they’ve just won.

It’s time to now seriously start talking about this Warriors team as one of the greatest in NBA history. History will judge them by the class of the 60s Celtics, 80s Celtics, 80s Lakers, and 90s Bulls. With their core likely to stay intact, they are already being billed as favourites for 2019 and will continue to be a problem for the rest of the league in the near future.

So, yes, Kevin Durant was the MVP. But even as he rose to become the most important player in the game’s biggest stage, he knew that he was part of a well-functioning unit. It’s still strength in numbers, and they may only be getting stronger.