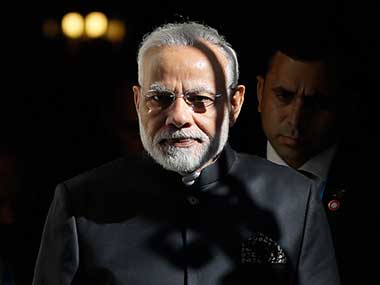 Prime Minister Narendra Modi, ahead of 2019 election campaigns, will visit Jaipur on Saturday to address a huge gathering of beneficiaries of government schemes, according to several media reports. The Rajasthan government is spending over Rs 7 crore to bring around 2.5 lakh beneficiaries to the meeting.

The money for this will largely come from funds for the schemes. The administration expects a gathering of beneficiaries of 12 all schemes run by the Bharatiya Janata Party (BJP) governments at the Centre and in the state, where the party faces a crucial assembly election later in 2017.
All India Radio reported that the function expects to host 50 thousand beneficiaries from Jaipur alone. It also reported that the prime minister will launch the SmartCity scheme during the rally.

The state government has arranged 5,579 buses to bring people to the Amrudon Ka Bagh stadium, officials said. According to an order of the General Administration Department (GAD), the government will spend Rs 722.53 lakh to bring people from 33 districts to the state capital.
GAD joint secretary Rajeev Jain has given directions to all district collectors that the cost would be met from the funding under the welfare schemes.

The government would pay Rs 20 per kilometre for each bus, adding up to an expenditure of about Rs 7.2 crore, according to the order. The largest number of buses are planned to arrive from Alwar, Udaipur and Ajmer districts. In Jaipur district alone, 532 buses are expected to ferry the beneficiaries to the venue.

Additional Director General of Police NRK Reddy said all security arrangements are in place for the prime minister's visit tomorrow afternoon. Security drills have been conducted to eliminate last-minute glitches. Two helipads have been constructed at the SMS stadium here, he said.

Sensitive areas in the city are covered by CCTV cameras, and temporary control rooms will alert the field units if they spot any suspicious activity. “We have called in 18 SPs from nearby districts. They are mainly officials who have served in the city and are aware of its topography,” Reddy said.