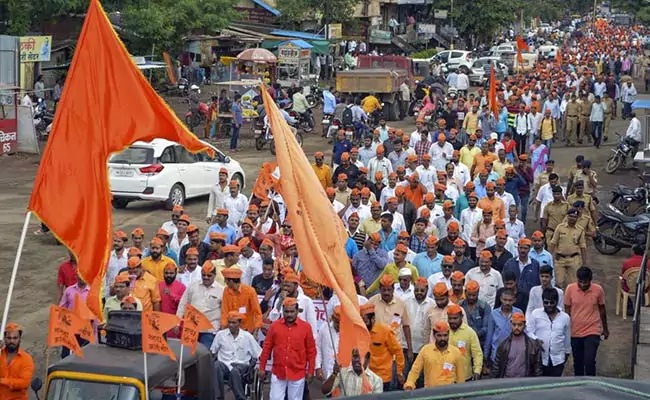 MUMBAI:  Massive security arrangements are in place in Mumbai after Maratha groups have called for a shutdown in the city today over the community's demand for quota in government jobs and education. Violent protests erupted in parts of Maharashtra on Tuesday after the death of a man who jumped into a river in Aurangabad. Several private bus operators have decided to keep their buses off the roads in Mumbai because of the shutdown call. On Tuesday, internet services were suspended in rural areas of Aurangabad as a preventive measure. Chief Minister Devendra Fadnavis appealed for calm and said the government was serious about a resolution. Schools and colleges in Mumbai will remain open today despite the shutdown call.

The Maratha Kranti Morcha, which is spearheading the agitation, is expected to take the protests to Mumbai where it has called for the shutdown. Another group, the Sakal Maratha Samaj, called for a bandh today in Navi Mumbai and Panvel as well. Stones were thrown at two buses in Navi Mumbai where shops remained closed in many parts.
Protesters blocked Mumbai-bound traffic on Eastern Expressway this morning.
The impact of Tuesday's shutdown was more visible in central Maharasthra's Aurangabad and adjoining districts.

One constable died and nine other policemen were injured in stone-throwing on Tuesday when protesters clashed with the police and torching vehicles.
The protests  were triggered by the death of a 28-year-old man, Kakasaheb Dattatreya Shind, who jumped into the Godavari River on Monday. He was rushed to a hospital where he was declared dead, police said.

Shiv Sena lawmaker Chandrakant Khaire was manhandled by protesters in Aurangabad yesterday when he went to attend the last rites of the farmer.
A second protester made a suicide attempt yesterday by jumping off a bridge in Aurangabad and was seriously injured.

In Aurangabad, protesters set a fire department vehicle on fire. Pictures from the area showed a vehicle being toppled with a plume of smoke around it. Tyres were burnt in front of a government office in Osmanabad and trains were blocked in Parbhani district. Protests were also reported from Sangli and Shirdi in Ahmednagar district.

The Maratha Kranti Morcha had demanded an apology from Devendra Fadnavis for alleging that some members from the community were planning violence during his visit to a temple at Pandharpur town in Solapur district on 'Ashadhi Ekadashi'.

Quotas for Marathas, a politically influential community that constitutes around 30 per cent of the state's population, has been a hugely contentious issue.