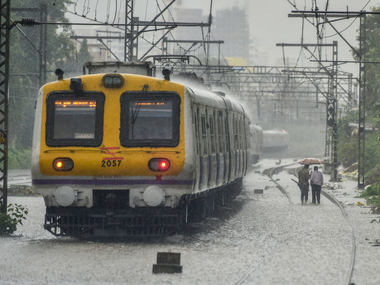 Following a day of torrential rains on Saturday, Mumbai witnessed a comparatively dry Sunday as the monsoon appeared to weaken its grip over the city, prompting the India Meterological Department (IMD) to withdraw its heavy rainfall warning for the city.

"Mumbai is likely to receive only a few spells of rain and there is no increase in rainfall expected in the next few days. Monsoon has slightly weakened and we have also removed heavy rainfall warning," IMD scientist Ajay Kumar was quoted as saying by ANI.

The IMD had earlier predicted heavy rains over the south Konkan region and Goa on Sunday. It had also forecast heavy rains with thundershowers in Mumbai and its suburbs over the next 48 hours from Saturday, with isolated extreme heavy rainfall in some areas till Monday. Thane, Raigad, Ratnagiri, and Sindhudurg were expected to receive "heavy to very heavy" rainfall.

Even private weather forecast agency Skymet Weather had said that an off trough along the west coast could result in "moderate to heavy showers" over Vidarbha, Marathwada, and Goa and Konkan, including Mumbai, for the next 24 hours from Saturday.

However, the likelihood of more rain is not completely ruled out for Monday. Mumbai, Thane, Palghar, Dhule, Nashik and Pune are likely to receive rain "at most places" on Monday, according to IMD's district-wise forecast. Raigad, Ratnagiri, Sindhudurg, Satara, Sangli, Kolhapur, are "very likely" to receive heavy rainfall at isolated places.

The monsoon officially arrived in Mumbai on Saturday and hit the city and other parts of Maharashtra with intense fury, disrupting flights and the suburban train system and road traffic, besides claiming two lives.

According to the Brihanmumbai Municipal Corporation (BMC), Mumbai received 76 millimetres of rain till 6 pm on Saturday evening, its eastern and western suburbs recording 28 millimetres and 32 millimetres respectively.

The Brihanmumbai Municipal Corporation told IANS that despite the heavy rains, flooding was prevented in even the most flood-prone zones in the city because of corrective works carried out in 120 areas.

Waterlogging was reported in parts of central Mumbai like Dadar, Parel, Sion, King's Circle and surrounding areas, with water entering low-lying homes. Even the Byculla Police Station functioned with over six inches of water inside the premises.

Thunderstorms accompanied with gusty winds and lightning very likely at isolated places over eastern Uttar Pradesh, Bihar and Jharkhand. Heat wave conditions are very likely at one or two pockets over west Rajasthan.

Squally winds speed reaching 40-­50 kilometres per hour and gusting to 60 kilometres per hour are "very likely" along over coastal Odisha and West Bengal and the north Bay of Bengal. Fishermen have been advised to not venture into east-central, west-central and south-west Arabian Sea, Odisha and West Bengal coasts and north Bay of Bengal until Monday.