Monsoon Session of Parliament: Stormy scenes ahead with thorny debates, no-confidence motion in the offing

Monsoon Session of Parliament: Stormy scenes ahead with thorny debates, no-confidence motion in the offing 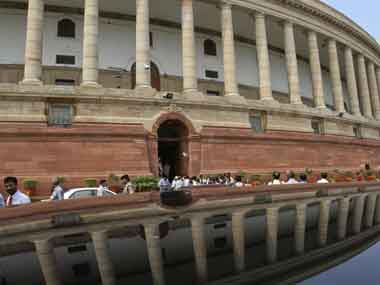 Memories of a near-washout Budget Session precede the convening of the Monsoon Session, which will be the last Monsoon Session of the 16th Lok Sabha. While members of both the Opposition and Treasury benches have vowed commitment to let the House function in accordance with the "spirit of democracy" and the Constitution of India, apprehensions that both Lok Sabha and Rajya Sabha are set to witness stormy scenes cannot be ruled out. The government plans to get some legislative business done, but the Opposition on Tuesday indicated that it is united in seeking answers for what was promised by the BJP four years ago. As Parliament meets on Wednesday for an 18-day-long session, both the BJP and the Opposition will look to set the tone for some key state polls before the next Lok Sabha elections due in less than 10 months.

The BJP has seized on Rahul's remarks allegedly made in a meeting with Muslim intellectuals to accuse the Congress of "Muslim appeasement", even as the Opposition party has denied that he ever made these comments and accused Prime Minister Narendra Modi of pursuing divisive agenda to win elections after his governance "failure".  BJP leaders believe that a political narrative imbued with its Hindutva agenda will suit the party as it battles anti-incumbency in poll-bound states of Rajasthan, Madhya Pradesh and Chhattisgarh and gears up for the next Lok Sabha polls next year.With a united Opposition outlining its agenda, which include several thorny issues like increase in mob violence, misrule in Jammu and Kashmir and a no-confidence motion against the government lined up, the Parliament session is likely to have a tumultuous start. Moreover shadows of the controversy surrounding Congress president Rahul Gandhi's alleged remark — that Congress was a party of the Muslims — are overcast on the Parliament session. The BJP and Congress' army of spokespersons were trading barbs on the issue even on the eve of the session.

On the issues of key legislation, Rahul and BJP minister Ravi Shankar Prasad were also seen exchanging less than polite remarks on Tuesday. While Rahul put out a curt tweet challenging BJP to pass women's reservation bill if it poses to be a party which promotes equality, law minister Ravi Shankar Prasad hit back saying he is ready to bring the bill if Congress promises to cooperate on the Triple Talaq bill.

Key bills in the offing

The government is keen to push politically significant legislations like Triple Talaq bill that criminalises instant divorce pronounced by Muslim men and also the OBC bill that seeks constitutional status for a commission meant for backward classes, a massive voting bloc being wooed by the saffron party. A report by PRS Legislative research states that 25 bills have been listed for consideration and passage, and three for withdrawal during the session. Eighteen new bills, including the much-talked-about Criminal Law Amendment Bill, 2018, which seeks to introduce death penalty for rape of minor girls below the age of 12.

Other important bills listed to introduced, passed, and/or considered in this session include the Insolvency and Bankruptcy Code (Amendment) Bill, Fugitive Economic Offenders bill, 2018, The Factories (Amendment) Bill, 2016, The Surrogacy (Regulation) Bill, 2016, The Constitution (123rd Amendment) Bill, 2017 (seeks to set up National Backward Classes Commission), Muslim Women (Protection of Rights on Marriage) bill, 2017, and Transgender Persons (Protection of Rights) bill, 2016. Here's a list of all the bills listed for consideration, and passage in Parliament

Another important development expected in this session is the election fo new deputy chairman for Rajya Sabha as the post fell vacant after Congress leader PJ Kurien retired from the Rajya Sabha on 30 June. However, there are speculations that the ruling BJP may try to postpone it because it fears it may not have the numbers to get its own candidate elected.

The contest for the position of the Rajya Sabha deputy chairperson holds great significance at the moment as it will be the first platform where all major political parties will be involved ahead of the 2019 Lok Sabha polls. Many believe that this election will be indicative of the political alliances that will come together for the General Elections.

Besides a brief three-year period when the Republican Party of India’s BD Khobragade held the office, the Rajya Sabha deputy chairman has always been a Congress leader. However, this time around, it is believed that the Congress has agreed to field a candidate from another Opposition party, indicating that it is willing to make any compromise if it means defeating the BJP.

Motion of No Confidence: Tremors of Budget Session may surface as Opposition parties plan to bring a no-trust motion

The Congress party announced that it will bring a no-confidence motion against the Modi government and added that it is in talks with other Opposition parties on the issue.

The Telugu Desam Party (TDP), an erstwhile NDA ally on the other hand, also submitted a notice for no-trust motion. It has asked the Lok Sabha Secretary-General to include the no-trust motion in the list of business for Wednesday, the opening day of the session. However, the attempts to table the motion bring back the stormy scenes from the Budge Session: A number of Opposition parties had given notices for a no-confidence motion, but Lok Sabha Speaker Sumitra Mahajan had rejected all of them, leading to the Opposition members criticising the Chair.

Even on Tuesday, members of Opposition parties sent a tart reply to Mahajan's letter, wherein she urged them to introspect while expressing concern over the frequent disruptions in Parliament. They claimed that "utter disregard" was displayed towards the rules and the Constitution during the Budget Session, which saw a virtual washout and expressed concern over the manner in which the no-confidence motion against the government was handled.
"...The Budget Session was witness to another trend which, to say the least, will prove to be lethal to our Constitutional democracy, if not checked," the Opposition leaders said.

They also pointed to the manner in which the government got the Union Budget passed, alleging that it was done "without any debate or discussion", pushing inadmissible amendments to the finance bill without the world knowing what was happening.

"The utter disregard to the rules and the Constitution displayed by the ruling dispensation did not add to the glory of the Chair and the House. We have seen how, day after day, for thirteen consecutive days the House of People was not even allowed to decide on the admissibility of the no-confidence motion.

"For all your concern for the image of our Parliament globally, this ignominious chapter in the history of Indian Parliament has no precedent world over," the leaders claimed in the letter.

They claimed that the media had made uncharitable comments about the role of the Chair in this entire episode.  "Any aspersion cast on the Chair reflects poorly on the members of that House as well. And we are not prepared for this kind of reflected glory," they said.

Pointing to the manner in which the no-confidence motion was dealt with, the leaders said as the concept of 'no confidence' flowed from Article 75(3) of the Constitution, it was the reason why the Rule 198 of Lok Sabha rules did not vest any discretionary powers with the speaker as far as admissibility of the motion was concerned.

They said once 50 members stood in favour of the motion sought to be moved, the speaker had to announce that the House had granted leave (permission) for the no-confidence motion to be taken up.

"The speaker has no discretion. It is the House which decides admissibility," they said, adding that Rule 378 of Lok Sabha rules gave full powers to the speaker to ensure order in the House.

"Yet, we were all witness to the disastrous manner in which the notices given by parties were dealt with...," they said. "You rightly called for introspection and advised us not to quote from the past to justify disruptions.

The opposition has been very decent and dignified in its conduct which is verifiable from the records of the House," they said. "Regrettably, it is the ruling party which is denigrating the rules and the Constitution thereby lowering the dignity of the House and the Chair," alleged the Opposition leaders in their letter.

They said given the stature and responsibility of the speaker, "we are confident that you must have already addressed a communication specifically to the Leader of the House as well, asking him to put a full-stop to the subversion of the rules and the Constitution".