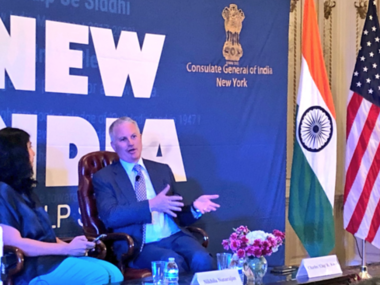 India’s Goods and Services Tax (GST), the country’s most ambitious indirect tax reform since independence is a “wildly positive” measure for the medium to long term and those who attack it are probably doing so because the nature of game changing reform is that it goes against the interests of the “entrenched”, Chip Kaye, co-CEO of global private equity giant Warburg Pincus said at the New India lecture titled 'investing in india ' at the Indian consulate in New York City Monday.

“When my friends go to India to look at businesses, I always tell them - careful! You’ll hear a lot of commotion but that’s because someone’s ox may be getting gored”, Kaye said.

Warburg Pincus was among the earliest to spread its footprint beyond America and Europe to India, where it is one of the best-established private-equity firms. Starting from the late 90s, Warburg has pumped in close to ~$4 billion in more than 50 Indian companies including Nicholas Piramal, HDFC, Kotak Mahindra Bank, Alliance Tires, Ambuja Cement, Bharti and ICICI which are rated among its big successes. India (and China) together represent the biggest investment destinations for Warburg Pincus outside the US - nearly 40% of the firm now lives and works in the South East Asia region.He showered praise on the depth of Indian entreprenuerial talent and discounted heavily the “confusion” that invariably results in the short term, post-reform.

Highlights from Kaye’s remarks during a fireside chat with Firstpost are below:

“People forget that reform is growth reducing in the short run and wildly positive in the medium and long term”
India goes through mood swings. You’ve got to be careful about cutting off the euphoria at the top and the depression at the bottom. Particularly with this administration, the expectations have been perhaps so high in the early stages…beyond any reasonable ability to attain. People often forget that reform is often growth reducing in the short run. GST is the best example of this. In the short term, it causes enormous confusion whereas in the medium and long term it is a wildly positive, growth enhancing measure. That’s the reality. When you change laws that favoured debtors and bring creditors into the equation, the transition creates uncertainty at a moment in time. In general, reform tends to go at the interests of the entrenched and they don't like it. That causes some of the negative sentiment. When some of my friends go there to visit businesses there, I tell them - careful! You may hear some negatives but that's because someone's ox may be getting gored. You’ve got to see past that. In my view, India has always been intensely committed to incremental progress.

“Demonetisation is an unmitigated positive”
This is going to be the subject of great economic research in the years to come. But whatever your view on it (demonetisation) as a policy matter, there’s no doubt that it has played a role in accelarating the migration towards the digital payment world which is an unmitigated positive. You look at what’s happening and India may well end up the lowest cost of payments infrastructure in the world and It’s going to take a long time to completely play out but it’s at least a piece of the puzzle.

“GDP and stock market returns don’t correlate at all”
GDP and stock market returns don’t correlate at all. There's no direct relation on a cyclical basis. The vision of the world we have is - lets say the China, India South East Asia economic region market is $ 17 trillion growing at 6 %, the rest of the world which is $ 60 trillion -  that's growing at 1%. India has the chance to become a $10 trillion economy. That’s the opportunity! There are reasons for that disparity between growth and underinvestment - the reality is that returns have been extraordinary in the US over the last decade or two. Yet, it’s a fact that some of the best deals happen at the time of sentiment troughs in emerging markets but it takes stomach to play the market at the time. Great fortunes get made when you go in the complete opposite direction to what's common sentiment.

“India’s entrepreneurs are the true Darwinian survivors”
What has always inspired me most about the Indian story are the entrepreneurs - they are the true Darwinian survivors. They operate in a pretty difficult, complicated environment and those who are successful are truly remarkable. The talent pool has only deepened over time. It's no longer people who come from places of privilege...the calibre of the people we back has changed materially.

“We’ve never not been invested in financial services”
Those people who have historically had the access to capital are not the people we are backing. It’s much more the people who had some fascinating business but lack of access to capital. Those are the people we back so they become the next generation of large scale businesses. In terms of themes - we’re playing the rise of that emerging consumer class if you will: unorganised branded and branded retail and all the things that go around it. We’ve never not been invested in financial services in India. One of the first things we did is HDFC, Kotak, ICICI - it’s an area we’ve always liked. In technology space - the technology exists but the market has yet to get there. We have always found ways to play to India’s cost and skill advantage and taking it to a global scale.

“Who matters more than what, we continue to search for talented entrepreneurs”
Investing is a bottoms up discipline not a top down one. That doesn’t mean the macro pieces don’t matter but it’s the nature of the underlying opportunity that decides where we invest. Who matters more than what. We are committed to contine finding that talented entrepreneur. We’ve made investment in some not-so-sexy businesses because of these people.

“There’s no substitute to finding the right people to do business with”
We often do post mortems and when things go wrong, we find it amusing how we tend to think of stuff we didn’t do well as something to do with the wrong management team and when it goes right we think it’s our brilliance! But there’s just no substitute for finding that right person with whom to do business. When we find that person, we don’t just provide capital, we become their close confidante, their sounding board, we worry about the same things, we like to think we are transforming the business rather than merely pumping in money. These are intensely personal relationships.

“Toughest decison is when to get out of something”
Everybody fixates on the decision making process. I think the toughest thing is to know when to get out of something. We don’t have the luxury of forever and neither do we have the burden of delivering quarterly results. In Asia, growth is always attractive. The challenge is that markets and sentiment can often go the opposite direction. Our frustration is always more about what might have been if we had sold out at a different time.