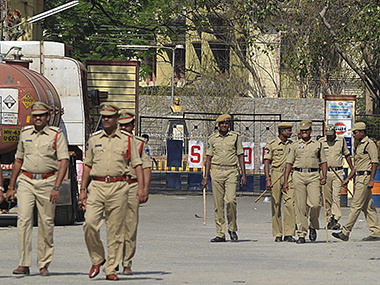 Shoot the messenger. That is what the arrest of a journalist on charges of murder because of the lynching of a crossdresser on 27 May by the Hyderabad Police soon after the incident suggests.

On that late evening close to midnight, two crossdressers were attacked by a group at a cafe under Chandrayangutta police station limits in Hyderabad's old city area over suspicion that they were child lifters. Arguments soon took an ugly turn with the locals assaulting the duo, killing one of them. The victim, 52-year-old Chandraiah was a native of Mahbubnagar district in south Telangana and had come to Hyderabad reportedly to seek alms during the Ramzan month along with three others.

By the time the police arrived, the kangaroo court had executed its crude sentence. Chandraiah succumbed to his injuries at the hospital while another person, Swamy was grievously injured.The locals had reason to be suspicious, though they had no justification to indulge in vigilantism. One of them was armed with a video of the police arresting a couple of transgenders in another part of Telangana and taking them away. The charge was that the group was the same that was plotting to kidnap children in Hyderabad. Within minutes of the argument, the mob was baying for their blood. A concrete slab from an under construction site was removed and smashed on Chandraiah's head.

While the police managed to arrest 16 of those who led the assault, including two minors, what raised eyebrows was the subsequent arrest of two persons who were not even present at the spot. These were Subhan, a journalist and Syed Saleem, a social worker. The police slapped charges of murder including abetment and also booked them under the SC/ST Act since Chandraiah was a Dalit. After their formal arrest on 29 May, Subhan and Saleem spent the next 17 days in jail.

Did Subhan post fake news that crossdresser child lifters were on the prowl? The journalist with 23 years of experience in several mainline Urdu dailies in Hyderabad runs a page on Facebook called 'Reporter Subhan' where in the early hours of 21 May, he reported on the incident involving four crossdressers being attacked by locals in Mahbubnagar.

It is important to note that the Mahbubnagar assault was not a figment of Subhan's imagination. To add credibility to his copy, he had even posted a video of the mob attack. According to other local media reports, the police had taken the crossdressers into custody, in order to save them from the mob. But the auto in which they were being taken away broke down and the angry crowd set the vehicle on fire.

Four days later, Telangana Police chief Mahender Reddy in a video message urged the people not to get swayed by rumours of child lifting and warned those who attack people on the basis of suspicion. Subhan posted the message on his Facebook page and says in order to ensure that his readers did not get influenced by the Mahbubnagar story and video, he deleted it on 25 May.

"My Facebook page in May had just 3,000 followers so my reach was limited. Now it has over 10,000 followers. The story of mob lynching did not exist on my page after 25 May. So on what basis did the police arrest me on charges of abetment to a murder on 27 May?," says Subhan.

The police say the problem was with the manner in which the news had been presented. It points out that the post by Subhan said that gangs from Bihar and Uttar Pradesh were caught red-handed by the public in Mahbubnagar. To add spice to the news, Subhan wrote that the children were drugged by the abductors who would then sell them in other states. He further editorialised that while the public was worried, the police was lazing around.

Saleem shared the news, adding his two bits by writing that the Mahbubnagar police had arrested two persons who had come to the town to kidnap children.

"When we have clarified that there are no child lifting gangs in operation, why did he publish such news? The mob that killed Chandraiah admitted to having read the news on his Facebook page. He is a repeat offender. In the past, he has posted horrific images from other countries like Myanmar and Syria of organs being taken out," says V Satyanarayana, DCP, Hyderabad.

What is obvious is that the consumption of hyperlocal news happens largely through Whatsapp and Facebook. More often than not, the information is not cross-checked and verified with more than two sources which is the thumb rule in any mainstream media newsroom. With a huge appetite for information about what is happening in the immediate neighbourhood, these two forms of social media have become the news source to go to. And the 'journalist' who is disseminating this information, has the power to mould perceptions.

But then wasn't arrest too harsh an action, considering the act was not done with an intention to cause mischief? The police defence is that such independent journalists do not come under the purview of any media governing body like the Press Council of India and so it is impossible to police them except with IPC.

The jury is out on whether the case against the duo will stand in court but it is clear the Hyderabad Police wanted to make an example of the duo. To send a message across to everyone who is in the business of sharing information that they could be hauled up in case they are found kite-flying on sensitive issues. With social media apps on the smartphone making just about everyone a citizen journalist, it is an important rap on the knuckles to ensure no one crosses the line.