Mehbooba Mufti warns Delhi against breaking PDP, says it will lead to 1987-like situation

Mehbooba Mufti warns Delhi against breaking PDP, says it will lead to 1987-like situation 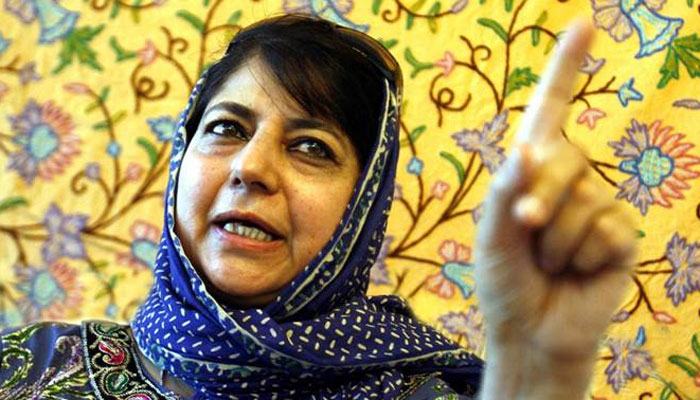 JAMMU: In a veiled attack on the BJP, former Jammu and Kashmir Chief Minister Mehbooba Mufti has warned that any attempt to beak her party People's Democratic Party (PDP) will lead to serious consequences.

Speaking to reporters, Mehboba Mufti said, ''Delhi's attempt to split the PDP will give birth to separatists like Yasin Malik and Syed Salahuddin. Any attempt to break PDP will only lead to a 1987-like situation.''

Though the PDP leader did not name BJP, it is being seen as a direct warning to the saffron party.

Mufti had earlier warned the BJP soon after it ended its ties with PDP and said that any attempt to engineer defections in her party “will erode the trust of the Kashmiris in Indian democracy”.

“If Delhi intervenes and breaks our party, and makes Sajad Lone or whosoever as the Chief Minister, it will erode the trust of the Kashmiris in Indian democracy. Any intervention from Delhi will be taken seriously,” the PDP chief had said.

She said this amid reports of BJP trying to engineer a split in the People’s Democratic Party (PDP) after breaking away from its erstwhile ally, in order to form a government in the J&K.

“It (any attempt to break the parties) can have serious repercussions and will strengthen the forces calling for the boycott of elections, as it will send out a message that mandate of the people is not being respected,” PDP chief had said.

However, BJP’s general secretary and its pointsman for Jammu and Kashmir, Ram Madhav, rejected reports that his party was working to form a government with the help of rebel MLAs from other parties.

He reiterated that his party backed the Governor’s Rule in Jammu and Kashmir for the return of normalcy.

After sharing power for nearly three years with PDP in J&K, BJP decided o pull out of the coalition government owing to the former's soft posturing towards separatists and stone-pelters.

Mufti's party was also reportedly against the Centre's decision to revoke and not extend the temporary suspension of anti-terror operations during the holy month of Ramzan.

After the BJP pulled out of the coalition government, Governor's Rule was imposed in the state and the assembly was put under suspended animation. The PDP leadership has since faced rebellion from at least six MLAs and an MLC.

Political temperatures, however, soared in the state when former separatist leader Sajjad Lone met BJP leaders, led by Ram Madhav, in Srinagar to discuss the “roadmap” for the restive state.