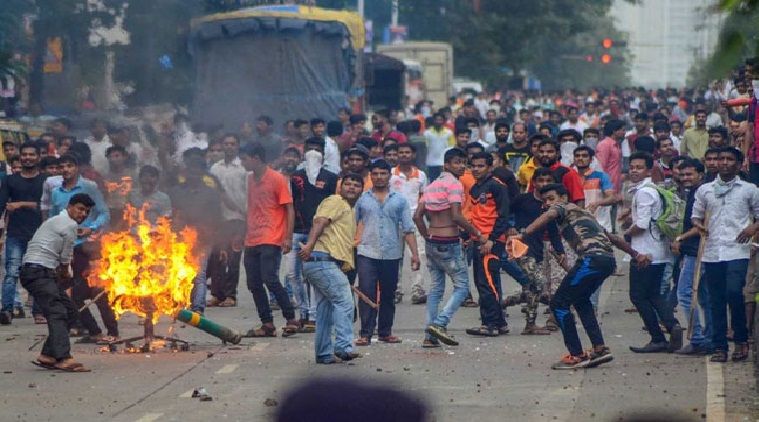 The protest has been planned by "Maratha Kranti Morcha", a local outfit
Protesters will gather at Azad Maidan in Mumbai
Police claims to have ample security arrangements to tackle the protest

The Maratha Kranti Morcha, a local outfit in Maharashtra who have been demanding reservations in government jobs and education for the community, plan another phase of their agitation today.
According to a press note issued by the Maratha outfit, the community is organising a "Jail Bharo Andolan", or "fill the prisons protest" for their major demands. The protest will take place at Azad Maidan in Mumbai.

The major demands of the protesters include, decision on the Maratha quota at the earliest, all cases against Maratha protesters be taken back, action against the officers responsible for firing and lathi charge during the July 25 protest, resignation or sacking of ministers and MLAs who gave irresponsible statements against Maratha community.

Besides reservation, the outfit has also been demanding for a complete loan waiver, "justice" in the Kopardi rape case, and a solution to unemployment for their community.

After police action was taken to control their violent protests, their most recent demand is for compensation to those injured during the protest as well as to the families of those who died.

Maratha Kranti Morcha leader Amol Jadhavarao claimed that the government has shown tokenism about their demands and has announced acceptance of some of their demands after an all-party meeting with chief minister Devendra Fadnavis. But there is still no official written order issued in this regard, he said.

The Mumbai police claimed to have ample security arrangements to tackle the "Jail Bharo Andolan" in the city, to maintain law and order.

The police has also been asked to remain alert in other parts of Maharashtra for any sudden protest or violence in this regard.

On July 27, chief minister Devendra Fadnavis had invited party leaders of both the houses for a meeting in the Vidhan Sabha (legislative assembly) to discuss the ongoing Maratha stir. He had earlier chaired a meeting with BJP ministers and party legislators from the Maratha community to discuss the issue.

A day before the meeting, a Maratha Kranti Morcha riot accused, who was injured in a clash with the police in Navi Mumbai, died of his injuries. So far, five people have reportedly taken their lives demanding reservations for Marathas, while one, who also attempted suicide, is being treated at a local hospital.