Lions in Gir forest safe as they seek refuge from rain on hillocks, say forest officers

Lions in Gir forest safe as they seek refuge from rain on hillocks, say forest officers 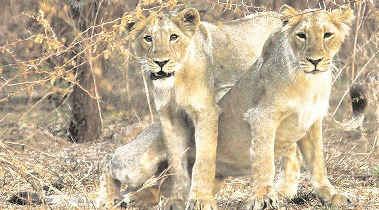 Extremely heavy rain on July 14, 15 and 16 caused extensive damage to human life and property, but wild animals inhabiting Gir forest and other protected areas in the four districts were safe, forest officers said.

Three years after flash floods in Amreli and Bhavnagar districts left 11 Asiatic lions and 1,100 blue bulls dead, the twin districts and neighbouring Gir Somnath and Junagadh are flooded again following very heavy rain. This time, though, no death of any wild animal has been reported. Officers cited the undulating topography and pattern of rain as reasons for this.

Extremely heavy rain on July 14, 15 and 16 caused extensive damage to human life and property, but wild animals inhabiting Gir forest and other protected areas in the four districts were safe, forest officers said.

“There are no reports of damage to wildlife or any wild animals being stranded in floodwaters. Gir terrain has some undulations. We are seeing flash floods in revenue areas because water runs off from hills to plains. But the forest has hillocks and wild animals instinctively move to higher places in such a situation,” Dheeraj Mittal, Deputy Conservator of Forests of Gir (West), told The Indian Express on Wednesday.

He said that trekkers were keeping track of Asiatic lions, an endangered species whose only wild population in the world is surviving in the Gir forest and other protected areas. “Some forest roads have been damaged due to heavy rain and low-floor vehicles are unable to move. Our staff are using motorcycles and utility vehicles for routine patrolling,” he said.

Neighbouring Gir Gadhda and Kodinar talukas were worse off. Gadhda was pounded by 20 inches of rain on July 16 alone, and 45 inches in seven days. The deluge affected coastal Jafrabad and Rajula talukas.

“Since the forest is hilly, lions and other animals seek refuge on hillocks. However, lions can become weak if continued rain prevents them from hunting. But no such weak big cat has been spotted yet,” said a field forest officer of Gir (West). Another officer said that the thick vegetation in Gir forest prevented flash floods.

Also, this year, the rainfall has been concentrated in hilly parts of forest and revenue areas, mostly along the coast. “It has been raining very heavily for a week. But animals have apparently moved to higher reaches instinctively. We have not had to undertake any operation to rescue any wild animal,” said Rajal Pathak, range forest officer of Rajula.

The lion census conducted in May 2014 pegged the number of Asiatic lions at 523. Of them, 174 were spotted in Amreli district alone and 37 in Bhavnagar. Junagadh had recorded 268 big cats while Gir Somnath had 44.

Sandeep Kumar, Deputy Conservator of Forests of Bhavnagar, said the situation was manageable. “The terrain in Mahuva, Palitana, Jesor etc is slightly undulating, so animals could move to safer places,” he said.

In June 2015, 11 lions, 1,100 blue bulls and some other wild animals were killed after a cloudburst caused a flash flood in Amreli. The carnivores, which forest officers said were ranging in Rajula in Gir (East) forest and Liliya, Krakach and other areas of Amreli social forestry division, were swept away by the swollen Shentrunji river.