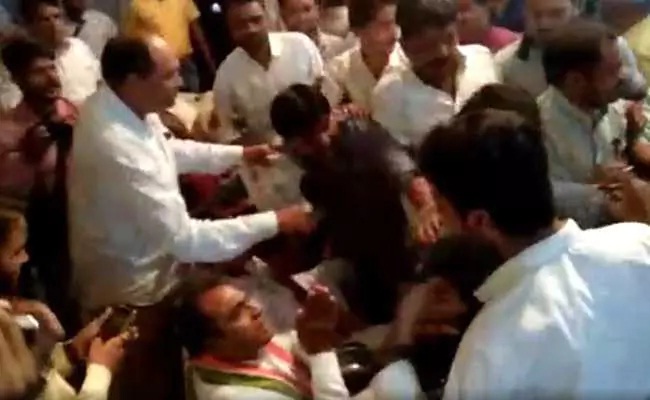 BHOPAL: As a fight over a chair escalated into a full-blown row between party workers in Madhya Pradesh, a top Congress leader in the state ended up giving advice that his leadership may not appreciate. "Learn discipline from RSS," said Deepak Babaria, the state Congress in-charge, as in-fighting broke out at an event he attended in Vidisha on Monday.
Mr Babaria, a general secretary in the All India Congress Committee, later said he saw "no harm" in citing the example of the RSS or Rashtriya Swayamsevak Sangh, the ideological mentor of the ruling BJP and Congress president Rahul Gandhi's frequent target.

The Congress leader had called an organisational meet, where chairs were arranged for all district functionaries except Sindhu Vikram Singh Bhawar Bana, a member of the royal family who also wants to be a party candidate for the Madhya Pradesh election later this year.

That there was no chair for Mr Bana apparently upset another Congress leader, Mehmud Kamil, who complained to a district in-charge.

Other local Congress workers followed Mr Kamil and the confrontation turned ugly and physical, with members pushing and shoving each other.

Mr Babaria, disgusted with the scenes, appealed the fighting Congress workers to stop and resolve their differences calmly. That is when he held up the example of the RSS.

Asked by the media to clarify, Mr Babaria defended his comments and said: "Yes, I appreciated the way Pandit Nehru used them during the China war, their discipline. If something is good about any organisation there is no harm in appreciating it."

He added: "Where there is competition, such incidents take place, but I am sure they will discipline themselves."

Last week, Mr Babaria was at an event in Rewa -- a BJP stronghold -- when he was manhandled after a press conference in which he had named Kamal Nath and Jyotiraditya Scindia as probable chief ministerial candidates of the Congress.

The Congress suspended six workers and also issued show cause notices to two leaders after the incident.

The Congress, in its attempt to end the BJP's three-term rule in Madhya Pradesh, faces a daunting challenge in the form of deep infighting and factionalism among its party leaders and workers in the state.