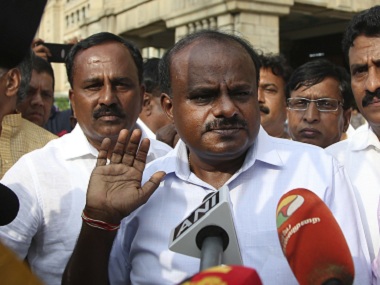 The Chief Minister of Karnataka, the state government website will tell you, is HD Kumaraswamy. What it will not tell you is that Karnataka also has an 'unofficial chief minister', Vatal Nagaraj, who heads a fringe group called Kannada Chaluvali Vatal Paksha.

Kumaraswamy alone is to blame for this impression gaining ground when he said that he personally as a Kannadiga, did not favour the release of Rajinikanth's Kaala. The film has been opposed by a handful of fringe pro-Kannada groups including Vatal Paksha because they say Rajinikanth's comments on the Cauvery dispute were anti-Karnataka. Pray why? It's because Rajini said in April whichever party comes to power in Karnataka will have to implement the Supreme Court order. Perhaps the Superstar should have said, "Elementary, my dear Nagaraj".

File image of Karnataka chief minister HD Kumaraswamy. APFile image of Karnataka chief minister HD Kumaraswamy. AP
So these Kannada groups have decided to hit Rajinikanth where it will hurt as the Superstar's son-in-law Dhanush is the producer of the movie. The man leading the vigilante pack is former MLA Nagaraj, who draws on the Shiv Sena model of sub-nationalism and alleged extortion to fuel himself and his group. There are many roll-call outfits similar to his that have sprouted in Bengaluru, available to do a hit job in the garb of protecting Kannadiga pride.

Nagaraj is a rent-a-cause activist with the dubious claim of having organised over 10,000 protests in the past four decades. This maverick is invariably at the forefront of any issue that feeds on the tonic of linguistic chauvinism to indulge in rabble-rousing. He opposed the release of Baahubali 2: The Conclusion on the grounds that Tamil actor Sathyaraj who played Kattappa in the movie, had made comments against Karnataka over the Cauvery issue nine years ago. Sathyaraj had to apologise in order to ensure the film released in the financially important Karnataka market.

But the issue is not so much with them as it is with the establishment's response. Kumaraswamy, by saying that the Karnataka Film Chamber of Commerce and Kannada organisations are opposing the release and that the filmmakers must oblige the opposition, has disappointed. He forgot within two weeks of taking the oath of office, swearing to uphold the Constitution of India. Today he is asking Rajinikanth and company to adhere to the Constitution of Nagaraj.

What the chief minister has also done is to legitimise the reign of terror the likes of Nagaraj perpetrate in Bengaluru. No exhibitor worth his salt would refuse to screen a Rajinikanth film, but they are forced to back off because no one wants to risk their theatres being vandalised.

It is appalling that Kumaraswamy, who has been a film producer and distributor himself, chose to react in such a manner. By letting the likes of Nagaraj be the Kannada versions of the Karni Sena who held Padmavat to ransom, Kumaraswamy has failed his first test as chief minister.

It is not so much a question of a film. Frankly, Kaala is immaterial in the scheme of things. What is distressing is the chief minister's inability to throw the rule book at the thug elements and instead, advising the others to cooperate.

It is this "swalpa adjust maadi" (a phrase used commonly in Karnataka, asking people to tolerate and adjust) attitude that will prove to be Kumaraswamy's undoing. Having tasted blood with the new chief minister, more vigilante outfits will find that derailing Bengaluru and Karnataka is a lucrative occupation, confident the law will look the other way. In fact, during one of the Karnataka bandhs over the Cauvery in 2016, when Biocon chief and eminent Bengalurean Kiran Mazumdar Shaw tweeted that Bengaluru should be renamed 'Bandh-luru', Nagaraj warned that anyone living in Karnataka will have to toe his line.

Kumaraswamy has already gone public with how he is at the mercy of the Congress party since it has a greater strength in terms of MLAs compared with his Janata Dal (Secular). But the people will still understand it as compulsions of coalition politics. What makes Kumaraswamy behave as if Nagaraj has put a gun to his head, is what the citizens of Karnataka will ask.

The larger question also is whether this is the image Karnataka wants to project where a few individuals can decide what Kannadigas get to consume.

The Karnataka High court has ordered that exhibitors cannot be forced to screen the film but if anyone chooses to, that theatre must be provided security. The saving grace is that Kumaraswamy has conceded that it is his responsibility to abide by its orders. But with his advice to the makers of Kaala in his individual capacity, he has made his intentions known.

In 2008, Rajinikanth had apologised for a comment on the Hogenakkal row, ahead of the release of his Kuselan that was similarly opposed by Kannada groups. This time, Rajini in his new avatar as a politician will have to pay a heavy price if he says sorry, as it will be seen as letting Tamil Nadu down.

In Kaala, Rajinikanth's character mocks the antagonists who have ganged up against him, asking, "Kya re? Setting aa?". He should ask the same of Nagaraj and Company.