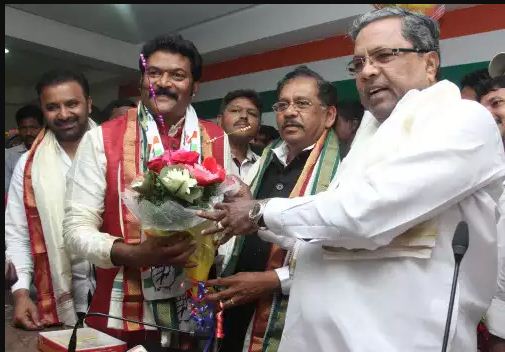 BENGALURU: Two missing Congress MLAs have been the butt of gossip from the time thegovernment formation + crisis erupted.
Two-time Vijayanagara (Ballari) MLA Anand Singh has been doing a flip-flop on his support to the Congress. Initially, there were reports that Singh was in touch with Congress leader D K Shivakumar and he had even sent a letter to him extending unconditional support to the party.

But some TV reports on Thursday evening said that the mining baron from Ballari would resign from the Congress after taking oath as the member of the Karnataka assembly. Singh also reportedly told some channels that he will not join the BJP.

Singh, a former tourism minister in the BJP government which ruled the state from 2008-13, quit the saffron party in January 2018 to join the Congress. He was arrested in November 2013 and lodged in central prison in Bengaluru before he got conditional bail in March 2015. Singh was in jail with Janardhana Reddy, the main accused in the 16,500 crore illegal mining scam and was a close associate of the Reddy brothers.

JD(S) leader HD Kumaraswamy has alleged that the Centre was using Enforcement Directorate against Singh to force him to not back the Congress.

Congress MLA Pratapgouda Patil, who successfully contested from Maski in Raichur left the Eagleton Resort citing health reasons. Patil had won for the first time from the BJP ticket in 2008 and contested on a Congress ticket in the recent polls.