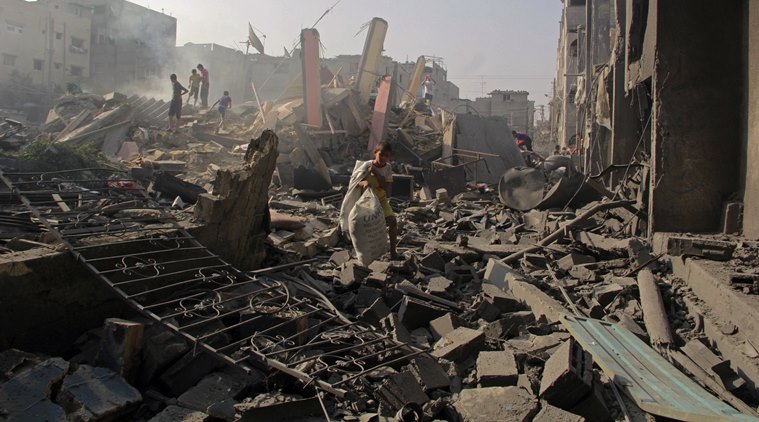 The Palestinians are seeking to press war crimes charges against Israel at the International Criminal Court in The Hague. The court’s prosecutor has opened a preliminary investigation, but not made a decision on whether to move ahead with a case.

The Israeli military said on Wednesday its investigation into one of the bloodiest incidents of the 2014 war in the Gaza Strip found no criminal wrongdoing by Israeli forces and there were no grounds to prosecute any troops. The announcement drew condemnations from Palestinians and human rights advocates, who accused the military of a whitewash.

The investigation focused on an Aug. 1, 2014, battle in the southern Gaza town of Rafah that erupted after an Israeli military officer was feared abducted by Palestinian militants during a cease-fire. Over 110 Palestinians were killed in the daylong fighting, and Palestinian witnesses had complained of heavy and indiscriminate shelling by Israeli forces.

Following what it called a comprehensive investigation, the army said its military advocate general determined “a criminal investigation is not warranted into the incidents that occurred during the fighting.” Fearing a soldier had fallen into enemy hands, Israel invoked its “Hannibal” procedure — a protocol that allowed the heavy use of force to prevent the capture of a comrade. Israeli forces attacked the area with artillery fire, tanks shells and airstrikes.

At the time, Palestinian residents described a terrifying ordeal as they fled their homes and searched for cover amid heavy shelling of their neighbourhood, located on the outskirts of the city. Human rights groups identified 121 people killed and accused Israel of committing war crimes by allegedly using disproportionate or indiscriminate force and failing to distinguish between civilians and combatants.

The Israeli investigation identified over 110 dead — including 42 militants and up to 72 civilians who were “unintentionally killed.” In one instance, it said 16 civilians were killed in an airstrike on a family home that was targeted due to faulty intelligence. But it said all of its actions had “clear and legitimate military purposes” and found no evidence that attacks were indiscriminate, aimed at civilians or motivated by revenge.

“The MAG did not find that the actions of the IDF forces that were examined raised grounds for a reasonable suspicion of criminal misconduct,” it said. “The MAG found that the IDF’s policy with respect to the use of firepower during the fighting —whether by tanks, by artillery and mortars, or from the air — accorded with Israeli domestic law and international law requirements.”

The “Hannibal” directive was cancelled by the military in 2016 following heavy criticism. Last year, the military introduced a revised version. Human rights groups have accused the Israeli military of ignoring or covering up wrongdoing in its investigations over the years. B’Tselem, a leading Israeli human rights group, condemned the latest findings.

“The military advocate general proves again that no matter how high the number of Palestinians killed is, nor how arbitrary the circumstances of their killing by the military was, the Israeli whitewash mechanism he heads will find a way to bury the facts,” it said.

Wael al-Namla, who lost three family members that day, said the army’s findings were “crazy.” Al-Namla, as well as his toddler son, both lost legs in the shelling as well. “They were bombing us from the ground and air randomly. They did not just violate the human rights, they forgot that there were humans in Rafah,” he said. “I want an independent international investigation that can guarantee my rights.”

The 2014 war was the third and most devastating round of fighting between Israel and Gaza’s Hamas rulers. Over 2,200 Palestinians were killed, including hundreds of civilians, and widespread damage was inflicted on Gaza’s infrastructure. During the 50-day war, 73 people were killed on the Israeli side and continued rocket fire on Israeli cities disrupted life throughout large parts of the country.

The Palestinians are seeking to press war crimes charges against Israel at the International Criminal Court in The Hague. The court’s prosecutor has opened a preliminary investigation, but not made a decision on whether to move ahead with a case.

A key factor in that decision could be whether the prosecutor believes Israel’s own investigations into actions by its troops are credible.