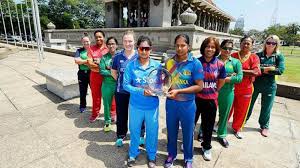 Supernovas rode on a disciplined all-round effort to edge past Trailblazers by three wickets in a last ball Women's T20 Challenge thriller at the Wankhede Stadium on Tuesday. After restricting the Smriti Mandhana-led Trailblazers to a modest 129/6, Supernovas rode on a collective batting effort from the top order to overhaul the target on the last ball of the innings. Needing four runs in the last over, Pooja Vastrakar (2 not out) and Ellyse Perry (13 not out) held their nerves to take Supernovas over the line. The Supernovas started the chase with a decent 47-run opening stand between Mithali Raj (22) and Danielle Wyatt (24) in the powerplay.

Later, Meg Lanning (16) and skipper Harmanpreet Kaur (21) contributed handsomely but as the team came close to the target, the Supernovas switched on the self-destruction mode and started losing wickets at regular intervals. But the target they were chasing was not too big and middle-order players Sophie Devine (19) and Perry played sensibly to drag the match into the final over. The final over saw Perry coming to the rescue of Supernovas as they finished the match on the final ball.