IPL 2018: What KKR, MI, RCB, RR and KXIP need to do to stake claim for two remaining playoff spots

IPL 2018: What KKR, MI, RCB, RR and KXIP need to do to stake claim for two remaining playoff spots 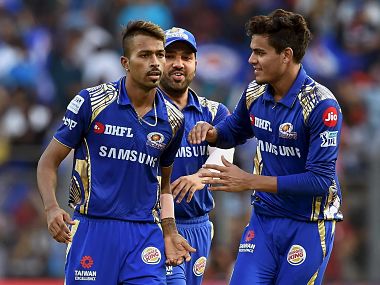 51 matches have been played in the Indian Premier League (IPL) season so far and there are still five teams which are playing for the third and fourth spots that guarantee a playoff berth. There have been many close finishes in this year’s IPL and because of that it is safe to say that this year’s tournament is the most open till date. The matches which will be played during this weekend will determine which will be the two others teams which will go through with Sunrisers Hyderabad and Chennai Super Kings in this year’s playoffs.

The easiest equation is for Kolkata Knight Riders while the other teams need to play with some permutations and combinations to seal the position in the final four.

After thrashing Rajasthan Royals at home in their last encounter, KKR now have 14 points and are at the third position in the table. Their next match is against the table-toppers Sunrisers Hyderabad. They just need to beat Sunrisers Hyderabad to make it to the top 4. If they lose their match against SRH then they need to rely on the results of other matches and in that case, if either RCB or MI, win their last encounter then KKR will be out of the tournament as both RCB and MI are certain to have a better NRR than KKR if they both win.

The defending champions Mumbai Indians found a way back into the race for playoffs even after losing five out seven games at the start of the season. Their NRR of +0.384 is now the highest among all the teams. Their last match is against Delhi Daredevils at Kotla and a win against them should confirm their position in the playoffs and failure in doing so will throw them out of the tournament.

Just like Mumbai Indians, RCB have now won their last three consecutive matches so in order to stay alive in the race, they just need to win their next match which is against RR, thanks to their positive NRR. If KKR win their match against SRH and MI lose their match against DD then both KKR and RCB will go through with RCB thrashing RR at Jaipur in their final league match of the season. In other case, if KKR beat SRH, MI beat DD then RCB need to win their upcoming match against RR and then the team with the higher NRR from RCB and MI will go through along with KKR.

RR have won three out of their last four matches that was a lot down to the individual brilliance of Jos Buttler but they are on 12 points with a NRR of -0.403. If they want to qualify then CSK need to beat KXIP, DD need to beat MI and RR need to win their remaining game against RCB. In this case, KXIP, MI and RCB will finish with 12 points and RR will go through to the playoffs along with KKR.

If RR lose their match against RCB then they will be out of the competition.

KXIP have lost six out of their last seven encounters. They have the worst NRR among all the teams in the race for the playoff spots which will make their chances a little less as compared to other teams even if they win against CSK in the last league match of the season. If they win against CSK with a big margin and RR beat RCB with a small margin plus DD beat MI and SRH beat KKR then there will be three teams with 14 points each — RR, KKR and KXIP and the two teams with higher NRR will go through.

If both RCB and MI win their last encounters then KXIP will be out of the tournament straightaway.