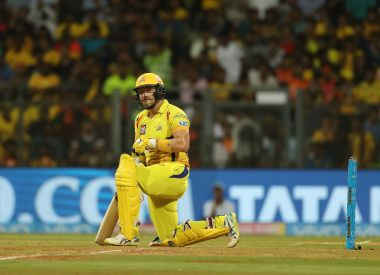 Since the arrival of the Indian Premier League over a decade ago, no Australian cricketer has embraced the tournament like Shane Watson. On Sunday night in Mumbai, he continued his love affair with the most prestigious T20 competition in the world by becoming only the second player to smash a century in an IPL final and, in the process, lead the Chennai Super Kings to their third title.

Watson might have been somewhat of an enigma playing for Australia, but he has arguably been one of the most sought-after and consistent performers in the IPL. Coincidentally, it was the first edition of the IPL in 2008 that really propelled his career. Captained by Shane Warne at the Rajasthan Royals in the first edition of the league, the following six weeks turned Watson’s career around as the legendary Warne instilled belief and confidence in Watson.

Throughout the IPL, Dhoni protected Watson vigilantly. He allowed the all-rounder to do things at his own pace. He bowled him only when needed, allowed him to train on his own merits and allowed his ageing warrior to field in the inner circle for the whole tournament knowing it would be his willow that will eventually make the difference. Importantly, Watson was allowed to bat in a position that he has always thrived in. In the recent past, he had been pushed into the middle order, but Dhoni knew from the outset that if Watson had to be regular performer he had to bat him in a role that was he was the most comfortable in.On Sunday night, Watson turned back the clock and gave the IPL what it had given him, a reputation. After a disappointing IPL in 2017, Watson probably didn’t fetch the amount of money that he once demanded, but MS Dhoni clearly felt Watson fitted perfectly into his policy of ‘old being gold’.

In the end, Dhoni was spot on. He had not bowled Watson for last two weeks because he was aware that Watson had to be managed properly at the business end of the tournament given his history with injuries. At the same time, Dhoni was also aware that all the experience Watson had acquired over the last ten years in the IPL and international cricket meant no situation on a cricketing field was ever going to daunt him.

Chasing 179 in the final against arguably the best bowling attack in the IPL, Watson bid his time. It took him 10 balls to score his first run. He lost his opening partner soon after and after five overs, run-rate was just marginally over six. But Watson did not panic. He waited for the right bowlers and the right balls. It is the recipe for success in T20 cricket, but it can take years to master it.

Watson executed the plan brilliantly. He played risk-free cricket against Bhuvneshwar Kumar and Rashid Khan before feasting on the second-tier bowlers. Right from his younger days in Ipswich, outside of Brisbane, Watson had built a reputation on hitting the ball hard, along the ground, with the full face of the bat. They are the principles of his batting that came into fruition again in the final.

But perhaps it was the celebration of reaching a ton that told the real story. Unlike his fellow countrymen, Watson remained relatively muted, just a raise of the arms and a big smile. This was a player at peace with himself and his love for the game.

Ten years ago, he might have need have needed to be mollycoddled, but now he is a retired Australian player who gains satisfaction by just playing the game. Six months ago, he had every right to feel his IPL career was probably over, but managed to seek the attention of MS Dhoni and Stephen Fleming by having a sensational individual season for the Sydney Thunder in the Big Bash League.

There have been plenty of Australian players that have come to the IPL with immense reputations and performed diligently, but no one has been as consistent as Watson. Perhaps it the manner in which he embraces the culture or the tournament or it might be all the positive vibes from the past.

A couple of years ago, in an interview, Watson showed his bond for India when he said, “I get asked for selfies and autographs all the time, and I almost feel it’s my duty to fulfill each of those requests.”

It is no surprise then that India tends to bring out the best in Watson. It was the IPL that transformed his career, the only time he led Australia in a Test match was in India and he is one of the rare Australian batsmen to score a century on the slow turning tracks in the last past two decades.

At 36, he might not be capable of bowling in each match, but his experience and exposure in the IPL makes Watson one of the most influential foreign players in IPL history. If there are Australian cricketers who need to know the secrets of performing well in the IPL, maybe it’s time to speak with Watson. He has done it all.