IPL 2018: Momentum and current form give KKR edge over SRH in Qualifier 2 clash at Eden Gardens

IPL 2018: Momentum and current form give KKR edge over SRH in Qualifier 2 clash at Eden Gardens 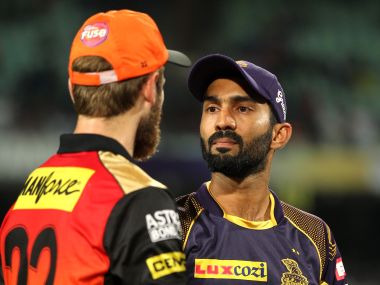 Kolkata: It starts as a humming buzz as the bowler reaches his mark. “KKR”, they chant at the Eden Gardens in a poetic frenzy — not surprising, considering the land has produced some of the most passionate poets this country has seen — before building steadily and strongly into a rhythmic crescendo. Crowd support though would not be the only intimidation that Kane Williamson will have to deal with when he leads his men in the Qualifier 2 of the Indian Premier League (IPL) at Kolkata Knight Riders’ (KKR) fortress.

Momentum, however, is with the hosts, and in shorter formats, this oft-overused, non-tangible variable can potentially be the difference between the teams.  KKR are riding a crest with four wins on the bounce — one of them against SRH. Conversely, the visitors, after dominating the league phase, seem to have suddenly lost their drive. The heartbreaking loss to Chennai Super Kings (CSK) in Qualifier 1 would have hurt, as do the four consecutive losses that would certainly have got Williamson thinking.These are two evenly-matched teams that are more similar than different. Led by first-time captains who are topping the batting charts for their respective units, the teams go into this knock-out match tied 1-1 from the league stage; both beating each other in away games with identical five-wicket margins. That though is not the only 1-1 margin the teams have; it is the third straight year that these two sides have made it to last-four, each winning once over their two playoff meetings.

In Shikhar Dhawan, Shreevats Goswami and Williamson, SRH have a potent and in-form top-order, but the problem begins from No 4 onwards. Manish Pandey, Yusuf Pathan, and Shakib Al Hasan have all played at least 11 innings each this season, and yet their average strike-rate reads 120.19. In contrast, KKR’s Nitish Rana, Dinesh Karthik and Andre Russell strike at 156.47. In fact, it was the contributions from Karthik, Russell and Shubman Gill that bailed them out against Rajasthan Royals in the Eliminator after their top-three flopped.

Bowling-wise, both teams prefer to field five frontline practitioners. While SRH have the three-pacers-two-spinners combination, KKR prefer to play their spin troika and leave fast-bowling duties to Andre Russell and Prasidh Krishna, whose death-bowling against SRH in their last meeting sealed KKR’s playoffs spot.

Bhuvneshwar Kumar, Siddarth Kaul, and Sandeep Sharma have accounted for 39 wickets so far, but ever since Rishabh Pant took Bhuvi and Kaul apart at Ferozshah Kotla earlier this month, SRH bowling seems to have lost its bite.

Rashid Khan, with 18 wickets from 14 matches, is league’s most successful spinner, and KKR would once again look at Robin Uthappa to get the better of him. Uthappa’s strike-rate against the Afghanistan leg-spinner this season is 187.09, and the 58 runs that Rashid has conceded to Uthappa is the most he has given to a single batsman in IPL 2018. Most importantly, Rashid is yet to dismiss Uthappa.

KKR would also be wary of Shakib, who, as a former 'Knight', would know the ground and the opposition better than most of his teammates. His 13 wickets suggest he has had a pretty productive couple of months, and the Bangladesh star would want to end the competition on a high.

KKR’s spin attack looks good enough to answer the SRH threat. Kuldeep Yadav, Piyush Chawla, and Sunil Narine have taken 44 wickets so far, and such has been their proficiency that Narine’s rare off day in the Eliminator didn’t hurt the hosts. The pitch at Eden Gardens is likely to assist the spinners, and with rains keeping away on Thursday, KKR spinners would want to use the dryness of the track to their advantage.

The face-off would also be an interesting match-up between Karthik and Williamson. The soft-spoken men have been the fulcrum of their respective teams, and despite this being their maiden shot at leadership in IPL, they have given an excellent account of their abilities. It might, once again, come down to which of the two similar teams blink first, and the result could well determine who plays CSK on Sunday.